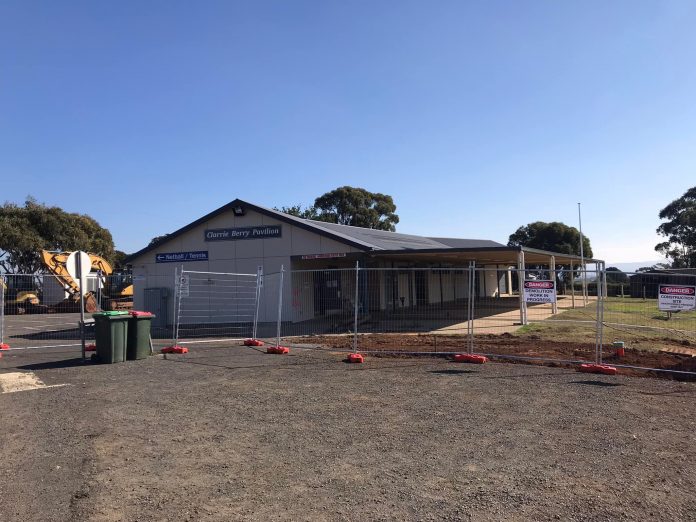 The $3.8 million hub will cater for multiple sport and recreation groups and will be located further north towards the timekeepers’ box on the oval’s western wing, giving football spectators a better view of the scoreboard on the opposite side of the ground.

Until the new facility is completed senior and junior footballers and netballers will all use the netball change rooms at the southern end of the reserve.

Some people contacted the Review concerned about the demolition of the historic pavilion, and lack of wider community consultation to keep the general public informed.

The new facility will include change rooms for players and umpires, a community and social space, a gymnasium, storage, a play space and landscaping works, while relocating and upgrading Little Athletics field facilities.

“Yes, we are going to have to make some short-term sacrifices while it is being built but we’re working together to minimise that impact.

“The vibe at the reserve is really positive and all user groups and the committee of management are working together as a united front to overcome the short-term hurdles and make the integrated community facility a reality.”

Kilmore Football Netball Club president Paul Maher said the club, along with other tenants, had consulted with council to provide input on the design of the new facility.

Plans for the new hub are not yet publicly available but a council spokesperson said they would be displayed at www.mitchellshire.vic.gov.au/capital-and-project-works/jj-clancy-integrated-community-facility

“[The demolition of the Clarrie Berry Pavilion is] not too big an impost on us. The netball change rooms are quite good facilities for us,” he said.

“We understand we have to take a bit of short-term pain for long-term gain. There will be some difficulties, but we’ll put up with it and look forward to the new facilities once they’ve been built.

“It’s going to be one of the premier recreation facilities in Mitchell Shire, which we’re very happy about.”

“It will modernise the reserve by removing facilities that are not compliant with contemporary standards and replacing them with facilities that will provide for current and future use,” he said.

“Council acknowledges the demolition of existing structures has and will cause disruption for users. That’s why we’re working with the committee of management and user groups to provide alternatives while the integrated community facility is being built.

“Temporary toilets have been supplied to the site and we have worked with the users to ensure all groups are catered for.”

The majority of the $3.8 million cost of the new facility will be paid for with $3.4 million from the State Government’s Growing Suburbs Fund, with council providing the remaining $400,000.