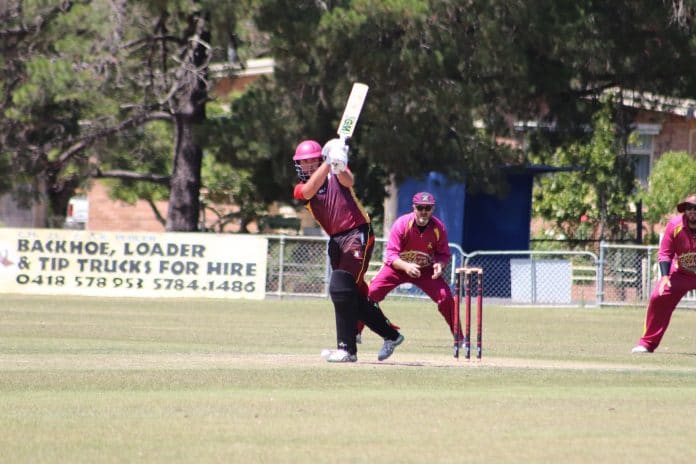 Broadford’s hopes of a home semi-final took a big hit after a two-wicket loss to bottom-placed Seymour in their impromptu Seymour District Cricket Association one-day match.

After day one was rained out last week, Broadford and Seymour donned the coloured kits at Harley Hammond Reserve on Saturday.

Seymour won the toss, sent Broadford in and picked up their first wicket quickly with opener Ashley Wood caught for 15.

Mitch Collier and Braden Hickey put 18 on the board before Collier was caught for 14.

Hickey and Liam Collier were able to consolidate and put on a 34-run partnership before the second Collier was also caught for 10.

Blair Hobba (1) and Hickey (38) followed soon after during a Broadford middle-order collapse as the hosts fell to 5/89.

Jack Connell and Jeremy Bradshaw were able to get something going for the home side towards the end of the innings, putting on 25 before Connell was bowled for four with Broadford 9/137.

Lee McKenzie was bowled shortly after as Broadford’s innings ended in the 40th over, all out for 140.

Seymour was able to put on a 45-run third wicket partnership before Jeremy Bradshaw got the breakthrough wicket, dismissing Jason Brown leg before wicket for 18.

Bradshaw followed up by taking the next two wickets, bowling James Voogt (28) and dismissing Simon Van Duinen (1) leg before wicket as Seymour fell to 5/78.

A 42-run partnership followed until Bradshaw broke through again, dismissing Danny Fountain leg before wicket for 21 and bowling Brodey Pointon for 26.

However, Bradshaw’s five-for wasn’t enough for Broadford to win as Seymour completed the run chase before the eighth wicket fell.

“I really think it was the pressure they put on our batsmen by bowling disciplined and in good areas that made our batsmen play errant shots and get out,” he said.

“They showed us how to play one day cricket, be disciplined and stick to a plan which we unfortunately didn’t do.”

The loss widens the margin between third-placed Broadford and second-placed Tallarook to nine points with one match remaining before the finals.

“We’ll play an away final but Tallarook’s a lovely ground with a fast outfield so for us, it’s not an issue at all,” Hobba said.

Despite having 193 runs to defend, Kilmore was no match for Tallarook as the reigning premiers chased down the total with seven wickets in hand and nine overs in the pocket.

Mitch Itter and Jac Smith-Williams put on a 64-run partnership before Itter was sent on his way by Pauly McDonald for 37 with Tallarook 2/91.

Ben Trezise took Kilmore’s third wicket as Smith-Williams was caught behind by Rose for 46 as Tallarook moved to 3/128.

Having only 117 to defend proved to be no problem for ladder-leaders Yea as the Tigers made short work of Eastern Hill, bowling out the visitors for 67.

Only two batsmen, Seamus Feery (20) and captain Dallas Bergowicz (25), reached double figures – no other batsman was able to make more than four runs.