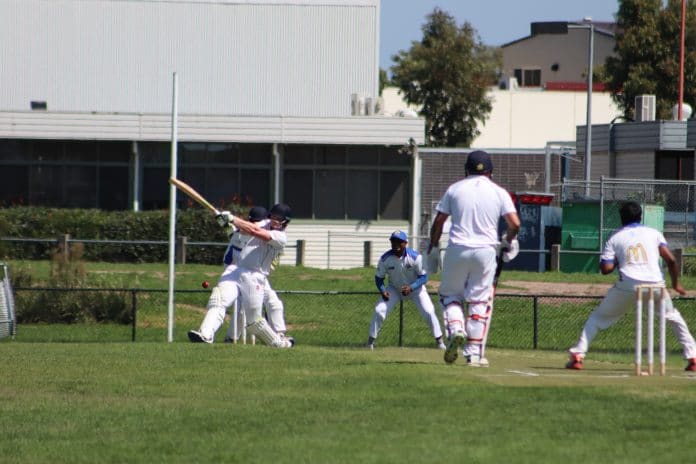 Laurimar remains half a game clear in second place on the Diamond Valley Cricket Associaton’s Mash Shield ladder following its 70-run win over Whittlesea on Saturday, while the Eagles are on the outside looking in.

After day one was washed out, the match turned into a 40-over one-dayer.

Whittlesea won the toss and sent Laurimar in to bat on the Power’s home deck.

After captain Jake Zerella was dismissed early, caught behind by Rajitha Ratnayake off Braydon Avola for three, Ashley Williams and Daniel Roberts put on a 98-run partnership.

Whittlesea finally broke through when Williams was dismissed caught and bowled by Suresh Fernando three runs shy of a half-century.

Roberts followed soon after, caught by Nathan Heaney off Yasith De Silva for 42 as Laurimar fell to 3/111.

Luke Richardson and Rian Boddy put 20 on the board before Richardson was also caught off De Silva’s bowling for 15.

Boddy and Andrew Nicholls put together a 50-run partnership, which ended when Boddy was stumped by Ratnayake for 34 as Laurimar finished its innings at 5/181.

Whittlesea had a tough ask ahead of it and started well with openers Yasith De Silva (27) and Brody Bell (19) both getting off to good starts.

The Eagles suffered a middle-order collapse before Mitchell Komen (19) and Nathan Somerville (16) were able to steady the ship late.

It wasn’t enough for Whittlesea, and Laurimar bowled the Eagles out for 111 from 31.4 overs.

“We batted well with Daniel Roberts and Ash Williams getting runs,” he said.

“It was pretty good to get 180 on the board which we thought was extremely competitive on a slow ground.

“It was especially good to have a win with Chris Marienfeld and Nathan Woods out who have been pivotal bowlers for us.”

Laurimar have all but locked up second place with the win as the Power are nine points behind first-placed Bundoora Park and just three points ahead of third-place Hurstbridge.

The Power hosts Panton Hill in the final match of the home and away season.

“We think playing at home is a big advantage for us so it’s another must-win next week.”

Whittlesea hosts cellar-dwellers South Morang in their final match and are still a chance to sneak into the finals, sitting half a game behind fourth-placed Thomastown United.

While Whittlesea must win, the Eagles will still need either Thomastown United to lose to Hurstbridge or a draw to get into the finals.

Montmorency made short work of Mernda’s total of 139 in their impromptu one-day Money Shield match, winning by eight wickets.

Mernda won the toss and elected to bat at home, but lose crucial early wickets, falling to 3/45.

While the middle order was able to stabilise the innings with a couple of handy 20 and 30-run partnerships, the lower order struggled to put runs on the board as the innings finished with Mernda 9/139.

Montmorency was able to get the job done in just 28 overs following a 68-run partnership.
James Baker took both of Mernda’s wickets but little could be done as the visitors were done in a hurry.

Sunday buses on the way for Kilmore