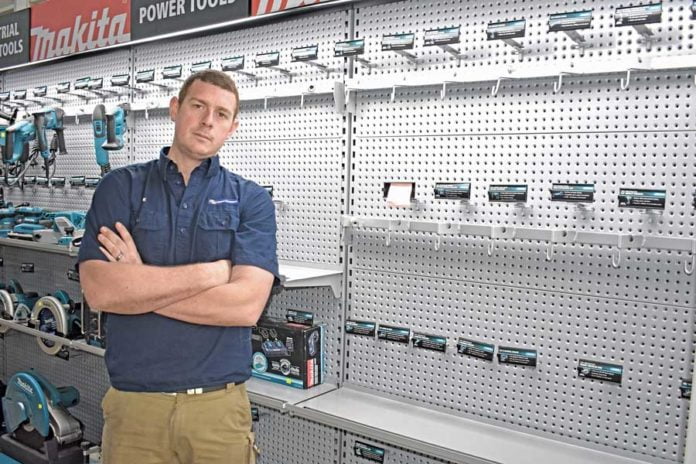 Romsey’s Thrifty Link Hardware owner Nick Waldhauser is devastated by the lack of police presence in the Macedon Ranges after his store was broken into last week – the fifth time in the past eight months.

Mr Waldhauser’s team had not long finished unloading 20 palettes of new Stihl and Makita stock when robbers broke in and stole the equipment.

The break-ins have taken not just a financial toll on the business, Mr Waldhauser and his staff have also suffered both physically and mentally.

“I get to a point where I think why keep doing this? How long until I can’t afford to keep the business running anymore?” he said.

“It’s wearing thin on our team. We’re in here at 4am every time this happens. When your staff come in at 6am and start crying, you know there’s something wrong.

“I’ve been sleeping overnight here for weeks on end. That means my wife is at home not sleeping worrying about me – it puts a lot of pressure on my relationship.”

Mr Waldhauser said the five break-ins have cost him around $40,000 in stock, wages and time spent on paperwork.

“We’ve spent about $25,000 on security to upgrade alarms, cameras and fog machines,” he said.

“This time there was only one police car in Malmsbury – I live 12 kilometres outside of Lancefield and I arrived before they did.

“I’m not having a go at Victoria Police because I’m very grateful for what they are doing but I don’t know how they do their job because they have no resources.”

He believes all five break-ins occurred about the same time because criminals know when police are off-duty.

“We’ve been hit around the same time every time – they have no fear at all because they know there are no police here at that time,” he said.

Mr Waldhauser believes a pattern of ‘cross-border offending’ is emerging within the Macedon Ranges – similar to what is occuring in the Mitchell Shire – where offenders are coming from Melbourne’s northern suburbs to commit crimes.

“People come out from places like Melton and Craigieburn and know they can get away with it – it’ll just get worst if something is not done,” he said.

“After people hear about us getting broken into, they come in and say they have as well. One man told me about his wife who was asleep at 1.30pm and someone came in her house, stole her keys and took her car.

“I don’t want to make this place look like a fortress – what would people think coming into the town and seeing bars all along the window?”

The burglary follows a Gisborne murder last weekend where a man allegedly tried to hand himself into police only to find the police station locked up – there was only one officer inside.

It was believed the alleged killer had to press an intercom button that connected him 30 kilometres away to Kyneton Police.

Police Association secretary Wayne Gatt said there had been a shortage of police in the Macedon Ranges for years.

“Gisborne Police Station was running a night unit until it recently ceased because of overall shortages in area – clearly having an impact on Victoria Police to provide policing and protect the community after hours.

“One of our members was rostered to work alone, this shouldn’t happen, but sadly this happens almost every day. Issues that result in risks to our members are not issues that we can simply ignore and deal with in the future.

“Victoria Police constantly reviews police numbers, levels of offending and peak times when police are required in order to keep the community safe.

There is no current plan for Gisborne to become a 24-hour police station, however the allocation of staffing levels is reviewed regularly,” he said.

Mr Waldhauser said after the second break-in at his store, he met with Victoria Police and Member for Macedon Mary-Anne Thomas to discuss the issue.

“She said she is really happy to report crime is decreasing – but look what happened? She needs to talk to the government and start pushing to get more police out here,” he said.

Ms Thomas said the Macedon Ranges continued to be one of the safest places to live in Victoria but understands there was still more work to do.

“I’ve listened to community concerns regarding the staffing at Gisborne police station and have raised these issues with the Local Area Commander, as well as the Police Minister Lisa Neville,” Ms Thomas said.

“As a result, a meeting for concerned community members was held with Inspector Chris Large in February and I’ll continue to work with relevant parties to ensure our community has the police resources we need.”