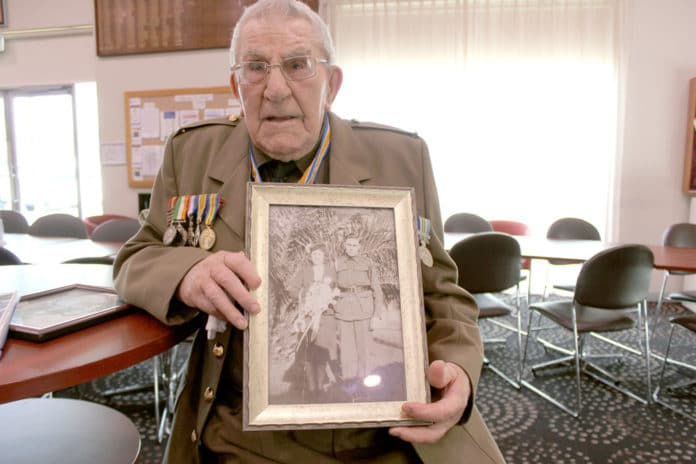 Epping RSL member Wally Whitworth will be one of the few World War Two diggers marching this Anzac Day in Melbourne.

Mr Whitworth said it was heartbreaking going to the Anzac Day service every year and seeing fewer of his mates.“I’ve marched since 1952 and carried the banner until the late 90’s until I started to get crook,” Mr Whitworth said.

“You go with all these fellas overseas, make friends in the camps that you’ve never seen before – you all join up and become mates and catch up every ANZAC day.

“You carry the Battalion banner together and we started with a fair crowd in 1952.

“The first turn-out we had was in the St Kilda Town Hall – there were over 2000 of us.“I had a friend who carried the banner with me for years – he passed away, that upsets you.

“Last year there were only four of us left.”

The 97-year-old was 17 when he joined the Militia Battalion in Oakleigh. He went on to serve in New Guinea with the 37th/52nd Battalion.From being in the Militia to serving overseas, Mr Whitworth knew how to fight and fire a rifle – but to learn how to fight in a war was completely different and at times – a scary experience.

When the war ended, the digger didn’t go home immediately.

“They needed someone to go around and find all the bodies of the diggers who were shot and buried locally,” he said.

“We had to find their bodies, wrap them in a towel and bring them back to our leading officer – then the troops were buried in the Australian War Graves.”

Mr Whitworth remembers watching American soldiers running motorbikes, Jeeps and wagons off the pier into the ocean at the end of the war.

“They would jump off before it would hit the ocean – you can buy motorbikes for 20 pounds there – it would cost them another 100 to get them home – so they left everything behind,” he said.

Mr Whitworth eventually made it back to Melbourne via Cairns – a week later he picked up a full time job and eventually went on to have a family with his late wife Jean Whitworth.

Epping RSL will host an Anzac Day dawn service on Thursday, starting at 4:45am.

A prelude will begin at 5am with the dawn service commencing at 6am – a gunfire breakfast will be served after the service for a gold coin donation.