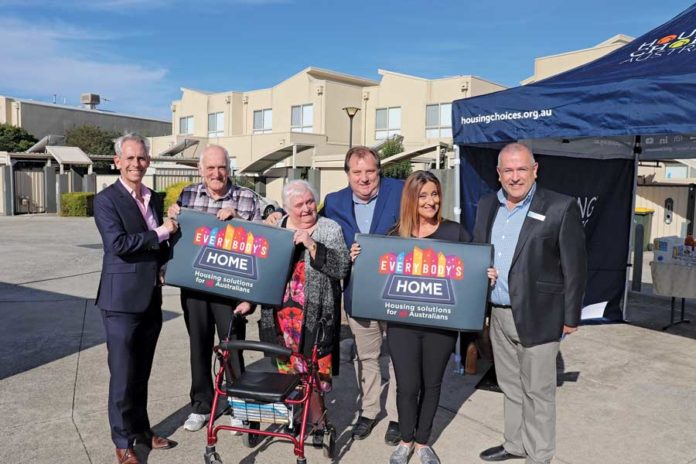 CITY of Whittlesea has labelled Australia’s housing system as ‘broken’ during their Everybody’s Home campaign launched on Thursday at a housing authority estate in Lalor.

In the lead up to the election, council is advocating for the development of a National Housing Strategy to meet Australia’s shortfall of 500,000 social and affordable rental homes, to reset the tax system to prioritise homebuyers over property speculators, introduce legislation that provides nationally consistent protection for renters, provide immediate relief for people in housing stress by increasing rent assistance and to commit to ending homelessness by 2030.

Cr Cox presented doormats with the campaign logo to Member for Scullin Andrew Giles and Member for McEwen Rob Mitchell to remind them to think of those less fortunate before going to Parliament.

“Our municipality has fewer social housing households compared to greater Melbourne, despite having some of the greatest levels of disadvantage in the state,” Cr Cox said.

“City of Whittlesea data shows the municipality has experienced at least a seven per cent increase in homelessness from 2011 to 2016.

“We also know that rental affordability has decreased from 60 per cent to 12 per cent in the last five years with 14 per cent of our community experiencing mortgage stress and 32 per cent experiencing rental stress.”

Mr Giles said he would keep his doormat on his office floor in Canberra.“This is a really important campaign – because we talk a lot about housing in Australia – but it’s all about property and investment not about the basic human right of having a safe and secure home,” he said.

Mr Giles said under a Labor leadership, the Housing Supply Council would be reinstated and a Minster for Housing would be appointed to deliver the party’s commitments.

Mr Mitchell and Mr Giles sat in with residents under the Housing Choices Australia arrangement to discuss the importance of affordable housing.

“The people we met with from a wide range of different backgrounds and stories – they all appeared comfortable in a safe, clean and affordable home,” he said.

“We want to support renters, there are agencies out there to help people and we have to be a part of that and join as a collective to actually build better communities and give people access to low cost housing.”