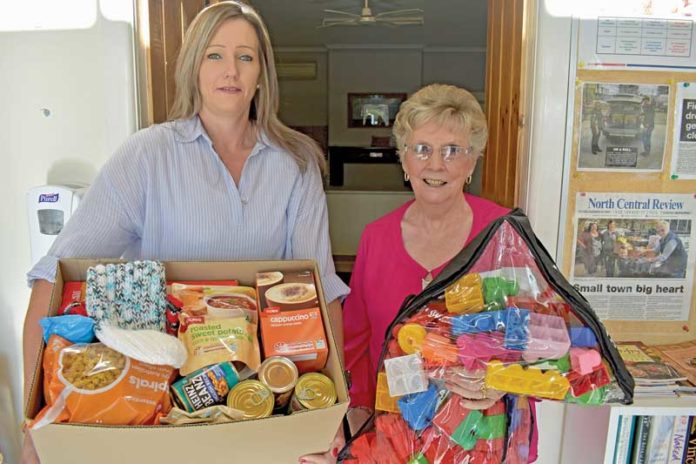 PYALONG Neighbourhood House has made a desperate plea for people to donate groceries for drought-stricken farmers.

The Neighbourhood House was recognised at a presentation night in Barooga earlier this month for donations given to farmers affected by the drought.

The house’s co-ordinators told North Central Review that 3500 families were isolated on their properties without enough food for not just cattle, but themselves and their children due to drought conditions throughout northern Victoria and NSW.

People have donated food and toiletry hampers, which are then prepared and sent off with hay bundles to families in need.

“We started working on this in August last year. I went to a barbecue in Barooga recently where I received a Certificate of Appreciation from the founder of Need for Feed, Graeme Cockrell,” Ms Waye said.

“I spoke to farmers who thought they were on their own, that nobody knew or cared.

“I said, ‘You’re not on your own, there are hundreds if not thousands of little people like us that are trying to help’.

“The original money that was coming in to buy hay is drying up and once the money stops there will be no more.”

Ms Waye said the drought had taken a toll on farmers and their mental health, resulting in an several suicide deaths.

“One of our volunteers took a four-wheel drive full of groceries to a farm, knocks on the door and nobody answers,” Ms Waye said.

Ms Waye said the volunteer then found the farmer in the shed in a distraught state because he couldn’t feed his children or cattle.

“We’ve been told that we’ve been able to save three farmers lives but we really need people to continue donating groceries,” she said.

“We are happy to drive and pick things up. People don’t realise this is a life and death situation for some people.”

Ms Waye said a psychologist at the Barooga event spoke on the rate of suicide, particularly in men.

“He put this down to the fact that men don’t talk to each other,” she said.

Budget pleases most of Whittlesea