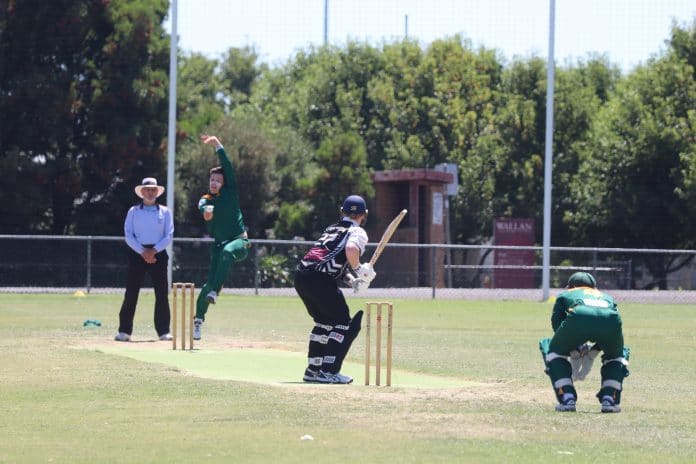 AFTER four consecutive losses in the McIntyre Cup, Wallan finally found itself among the Gisborne and District Cricket Association winners with a crucial victory against Woodend.

Playing at home, the Magpies needed a win to keep a finals spot in sight and were able to do so, bowling the visitors all out and securing an 85-run win.

Woodend won the toss and sent Wallan in to bat first, with the return of regular opening batsmen Ryan Bonner and Bailey Fowler who made 18 and five runs respectively.

It was Bryan Vance’s knock of 66 at number three that ignited Wallan’s fight for a reasonable tally, which was then bettered by young gun Matthew Clayton who, at number five, made 73 runs.

Wallan’s captain Steve Bell said he was pleased to see the improvement in his side’s batting and was overjoyed with Clayton coming into the side and contributing to the middle order.

“That’s two weeks in a row that Matthew’s come in and done what he was brought into the team for in the middle order batting period,” he said.

“He’s always looking to rotate strike and hits a lot of ones and twos rather than fours, and that’s what we were struggling with before he came in.

“Together with Bryan, they made up a 140-odd partnership. Bryan is our most reliable player in the team and he’s been able to bowl as well, opening the batting innings two weeks in the row.”

For Woodend, Tom Robson led the charge with the ball, taking three wickets, with Hamish McDonald closely behind with two.

Batting the entire 45 overs with three wickets in hand, Wallan finished the innings on 6/199 – its highest total since round three against Sunbury Kangaroos, when the side made 4/209.

Wallan continued its impressive performance in its bowling innings, with Chris Vecchie leading the way with four dismissals of Woodend’s bottom order.

Behind him with three wickets was Bonner, taking the last two wickets of Robson, 22, and Ben Matchett, 3, bowled and run out respectively, to conclude Woodend’s innings on 114 in the 43rd over.

“Our bowling has been pretty consistent all year. We probably had a few too many wides over the weekend though and we need a little bit of improvement with our fielding,” Bell said.

“Wickets are genuinely shared around; we don’t have massive wicket takers.”

“Chris bowled very well; he has the last couple of weeks since bowling spin. He was a pace bowler but just before Christmas he changed to spin, and that was a bit of a struggle at first for me but now he’s got his rhythm,” Bell said.

Bell and Vance rounded out the remaining wickets, taking one apiece.

Callum Large was Woodend’s most successful batsman making 27 not out, after being dismissed for a duck in his first game the weekend before against Bacchus Marsh.

Bell said the win was well deserved and a testament to the team’s hard work at training.

“It was good to finally get one, especially since the Christmas break, we’ve done a fair bit of work with extra training from some of the guys to four, five nights of the week at the nets.

“A lot of hard work has gone towards this.”
Wallan will travel to Salesian College to play Rupertswood this weekend for its second last match of the GDCA season. A win will almost guarantee its position in the finals, which start from March 12.