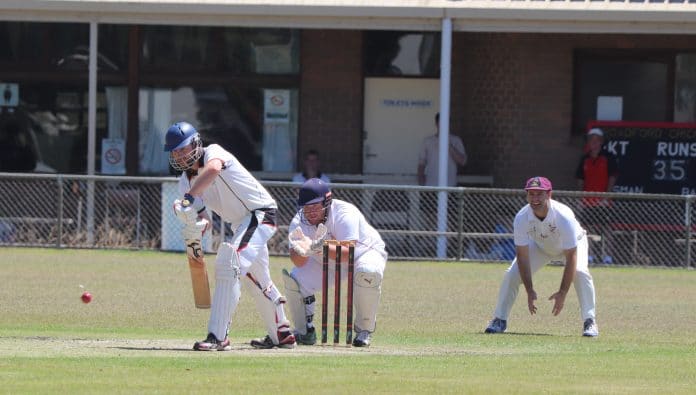 TALLAROOK earned a vital win in its pursuit of a Seymour District Cricket Association A Grade finals berth, narrowly edging Yea Tigers on Saturday to vault into the top four.

The ‘Rook entered round 13 trailing the Tigers on points but with a superior percentage, meaning whichever team won the match was guaranteed to be in fourth place with only two rounds remaining in the season.

Tallarook, playing at home, elected to bat after winning the toss but was soon caught in an arm wrestle.

The opening tandem of Cam and Travis Muir was broken when Cam was bowled by Yea’s Andrew Chisholm for 14 runs, and Travis fell shortly after to Cam Armstrong for eight.

It was skipper Lachie Watts and number-four batsman Leigh Irving who steadied the ship, forming a 67-run partnership.

Watts eventually fell for 32 but Irving batted on with Shane Topham until he too was dismissed for 46.

Topham continued at the crease as partners including Andrew Dundon, 13, Coby Schulz, zero, and Mitch Itter, four, continued to fall around him.

Corey Jones made a two-run cameo at the end of the innings, finishing unbeaten alongside Topham, 34 not out, to bring Tallarook’s total to 7/160 from 45 overs.

A tense run chase unfolded, with the Tigers never out of contention for a win despite some early setbacks.

Openers Lawrence Heath, 13, and Biron Hardinge, four, were removed by Kalon Winnell and Irving respectively, but Nathan Beattie kept the scoreboard ticking over with 33 handy runs at number three.

Yea looked in trouble again after Beattie fell, but Armstrong’s middle-order unbeaten 47 again kept the Tigers in the race.

Armstrong ran out of partners as the final five Yea batsmen fell for only 25 runs, leaving the Tigers 12 runs short of victory with 14 balls remaining.

The Rookers will have a tough job consolidating their place in the top four this weekend when they face top side Eastern Hill, which had a surprise loss to Kilmore in a tense match on Saturday.

Playing at home at Kings Park in Seymour, Eastern Hill was put on the back foot by strong bowling performances from Robert Hanson and Josh Buttler.

Hanson removed Eastern Hill opener Brayden Speechley for seven and number three batsman Ben Bryant for a duck, while Buttler claimed the scalp of the other Eagles opener, Dallas Bergowicz, for 15 in the first of his team-best four wickets for the afternoon.

Eastern Hill skipper Seamus Feery’s knock of 39 helped the home side reach triple figures at 9/103 from its 45 overs.

Craddock was one of only three Kilmore batsmen to notch double figures, but Marcus Davern’s 16 and Buttler’s 28 were enough to bring the visitors to 7/104 with 10 balls to spare.

The result means Kilmore remain alive in the hunt for a top-two berth and can guarantee itself a finals spot with a win in one of its last two games.

The Blues will host Broadford this weekend, with the visitors coming off a strong 89-run win against bottom side Seymour.

Evan Mills’ middle-order innings of 53 not out set up a team total of 6/175, which Broadford easily defended bowling the visitors out for 86 within 39 overs.