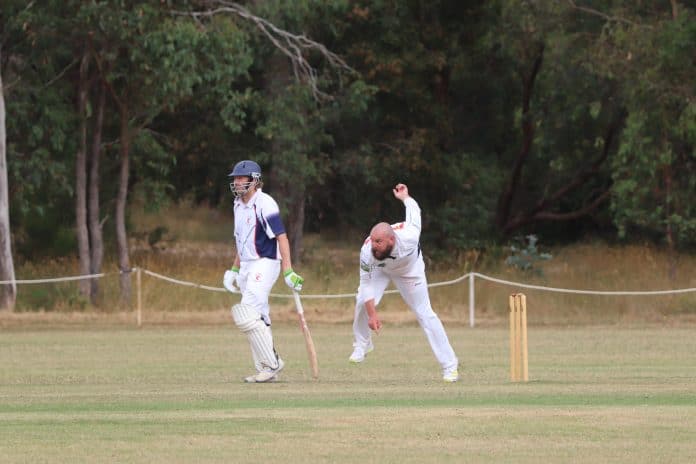 WET conditions and an opponent hungry for its second win of the season thwarted Kilmore’s attempts on Saturday to move its way up the Seymour District Cricket Association A grade ladder, handed defeat by Tallarook.

The home side lost the toss and were sent in to the bowl first – Kilmore captain Josh Buttler said he would have also made the decision to bat first if he had won the toss, given the weather conditions that saw the match reduced to 40 overs per side.

“There’s no doubt that if we had of won the toss, we would have had a bat. The ball was like a cake of soap to bowl with in our innings, which made it very hard for our bowlers,” he said.

“We toiled hard, and I was actually quite impressed with our bowling effort considering the conditions.

‘”It was a hard day of bowling, but I thought we kept them to a pretty reasonable score considering the conditions.”

Lachlan Watts was Tallarook’s best with the bat, scoring an unbeaten 95 off 115 balls, with fellow batsmen Leigh Irving and Cameron Muir the next best, scoring 36 and 25 respectively, combining for their side’s 5/194 total.

For Kilmore, it was Buttler who took the most wickets, dismissing Muir, Coby Schultz, and catching the ball bowled by Mitch Van De Duim, which saw Mitch Itter leave the field for a duck.

Buttler said the bowling efforts from his side could have been even better if Kilmore made the most of some of their opportunities.

“It could have easily been a lot better; we had a few half chances that were just miss-fielded or just missed the stumps. It was just one of those days that if a little bit of luck went our way, it could have been a completely different result,” he said.

With the bat, Kilmore were unable to make competitive individual totals – all out for 158 in the 37th over.

Kevin Craddock was the strongest for Kilmore, making 48 off 76. He was closely followed by Tassone’s 32 off 31, who showed promising signs of a strong innings if he hadn’t have been bowled leg before wicket by Watts.

Wicket taking was shared among the Rook’s bowlers with Schultz taking 3/32, Kalon Winnell 2/21 and Watts 2/23.
Sent on to bowl in what ended up being Tallarook’s last over, Shane Topham ended all hopes for Kilmore, taking the final two wickets in his first balls bowled.

Buttler acknowledged his side needed to continue working on its batting, and working towards scoring bigger totals was a priority.

“We just started a little bit behind the eight-ball really with the chase and I think one of our biggest issues this year is that our batsmen are getting starts but they’re not turning it into the big scores,” he said.

“That’s something we’ve got to work on throughout the season and seeing our players remain at the crease for those bigger scores, then I think we can turn it into a big team score.”

In other SDCA games, Broadford lost to Yea Tigers at Harley Hammond Reserve. Broadford were sent into field first and bowled the Tigers out for 132, with Jake Martin and Riley Nolan starring with 3/9 and 4/32.

Despite being tasked with a manageable run chase, seven of Broadford batsmen failed to surpass single digit figures, seeing the home side all out for 117.

This weekend, Kilmore will host first-placed Eastern Hill at Kilmore, Tallarook with travel to play Yea Tigers and Broadford will face Seymour at Chittick Park.