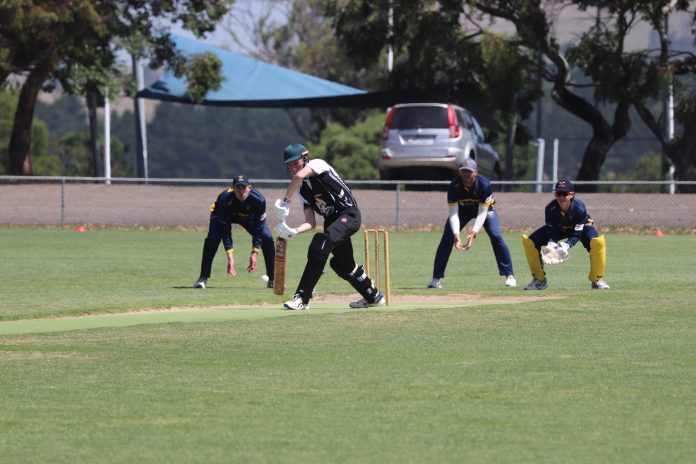 Hosting Bacchus Marsh at Greenhill Reserve on Saturday, the Magpies were sent in to bowl after losing the toss.
Wallan captain-coach Steve Bell was pleased with his side’s start, but acknowledged it was the middle period of the innings where the Magpies let themselves down.

“It was always going to be a tough game for us coming up against last year’s premiers. We bowled well, but the middle period we struggled to get a wicket and Bacchus Marsh put on a partnership of over 100,” he said.

“I think the pleasing thing was we still managed to get them all out. It looked like they were going to get around 260 runs at one stage but we kept fighting and we ended up getting them out earlier on.”

Bell led the way with the ball for Wallan, taking 4/16, including one duck, and bowling two maiden overs. Closely behind Bell’s effort was Hamish Mullavey-Clark, who took 3/48 as well as a pivotal catch to get Bacchus Marsh’s Nicholas Strangio out for 61, his side’s best performance.

Mace Cousins, who was caught and bowled by Chris Vecchie, was Bacchus Marsh’s next best with the bat, scoring 55 – another important performance to contribute to the visitors’ 215 total.

With the bat, Wallan knew it had a challenge at hand, but one Bell thought was achievable. However, the Magpies were all out for 113 by the 33rd over.

Wallan entrusted young batsman Bailey Fowler to open alongside Vecchie, with the pair making 11 and 26 respectively.

Vecchie led the way for the Magpies’ batting line-up, equal top-scoring with Bryan Vance, who also made 26.

“That was the first time we’ve been all out. We got off to a good start then we just collapsed. The second or third wicket we dropped was when it started to go down for us,” Bell said.

Bell said despite losing at the weekend, he was impressed with the stance the Magpies had made in their elevation to the top division of the Gisborne and District Cricket Association.

“For the first whole half of the season, our bowling has been really good – out of 50 wickets we’ve taken 49. I’ve been happy with batting but probably needs a little bit of improving,” he said.

“To be four [wins] and one [loss] and sitting third on the ladder, I’m extremely happy with that.”

Romsey was also unsuccessful at the weekend, batting out its 45 batting overs for a total of 7/155 against top team Sunbury United.

Tasked with the run chase, Sunbury’s Sammika Perera and Liam Sherlock made the task easy, scoring 61 and 50 respectively to lead their side to 156 at the conclusion of the 36th over.

The McIntyre Cup returns on January 8, when Wallan will travel to play Gisborne at Gardiner Reserve, while Romsey travels to play Woodend.

GDCA celebrates the 2021-22 season with its annual senior awards