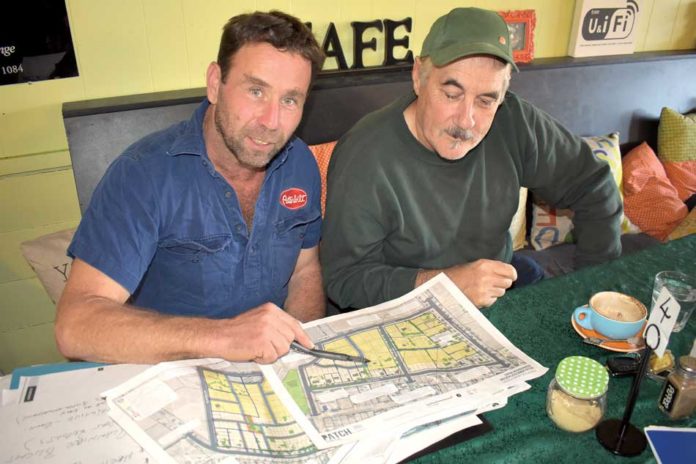 Lancefield residents feel they are trapped and being exploited following a Macedon Ranges Shire Council plan to control the development of their land.

Close to 30 residents could be at risk of losing their third party rights, property devaluation and extensive infrastructure costs if Macedon Ranges Shire Council approves a Development Plan Overlay at a council meeting on Wednesday.

A Development Plan Overlay is an overall plan created to control land use, development and redevelopment over a defined area. This means a permit must not be granted to subdivide land, construct or carry out works without the satisfaction of council.

The sites have multiple ownership and can be subdivided but council believes ‘this carries the risk of ad hoc development that does not respect the town’s characteristics’.

Lancefield’s Narelle Stebbins said the original plan was for the road networks and houses to fit in the with Lancefield design.

“They wanted to make sure the roads actually worked across the whole area – rather than pockets developed on their own. So all of that sounded fine,” she said.

“Then we found out you have to do a development plan costing about $200,000 for an entire area including a proposal of cost sharing for infrastructure. Council said they would not pay for anything. In my mind, the only way it can work is if a developer purchases an entire area and pays for it all.”

She said herself and residents could simply not afford to change anything on their property or even sell.

“We can’t do anything. We can’t afford to subdivide, we can’t even put a shed on our property. I can’t sell it because I’ve lost the value in my land. Developers have said that they are not interested in my property because of the very high cost to develop,” she said.

“The council haven’t created an entire town plan and therefore don’t understand all of the infrastructure required for Lancefield, it’s premature to building infrastructure for these three small areas.”

Lancefield couple Angela and Doug Ogilvie believed the idea stemmed from past mistakes.

“It’s gone to the extreme that is actually going to cause development blight because people can’t afford the financial debt for the cost of the infrastructure,” Mr Ogilvie said.

“Every person who lives outside these three areas has their third party rights and their rights to operate as individuals – if they vote this is we lose that.”

Mr Ogilvie said his previous idea to sell a block on his land for retirement has changed.

“For me to sell a block there, I’ve got to pay for the entire infrastructure in that zone and then get money from the neighbours,” Mr Ogilvie said.

“My subdivision was going to be my income or superannuation.

“They thought they could float it – but when we saw that cost of infrastructure they said we can’t afford this – so what’s the option? We can’t do anything.”

Lancefield resident Robert Green said if the plan was approved if any resident made a change, the entire zone would be affected.

“If this is implemented we think this will become part of the 173 agreement being put on your title or property. This means that if you apply for a planning permit from the shire or you transfer your land to another family member it triggers the cost structure,” Mr Green said.

“Even if you don’t agree with it they can put restrictions on your property. They’ve provided plan possibilities of subdivision and road networks. My Dad’s place has been heritage listed, but his house is removed from the maps.

“The council even said they find it easier to deal with one or two developers rather than 14 in one area.”

He believes the original plan for lots in each zone could be changed and moved by council.

“The change can be implemented between the shire and the developer because we’ve got no third party rights,” he said.

“You can actually go to the planning minister and get the zoning changed or you can go and get approval without having to consult council. I think they’ve got State Government targets and planning – they are trying to hit these targets.

“It’s quite interesting that State Government has said that they want us to grow to 6000 residents, but the council has only got 3500 – there is not enough land for 6000 people the way the council has done it.”

Macedon Ranges Shire Council director planning and environment Angela Hughes said several enquiries had been made to landowners and potential developers to subdivide the land.

“An independent planning panel appointed by the minister has agreed on the need for a planning tool in the area and that a Development Plan Overlay is the appropriate planning tool to apply,” she said.

Gisborne growth and town character a concern for residents