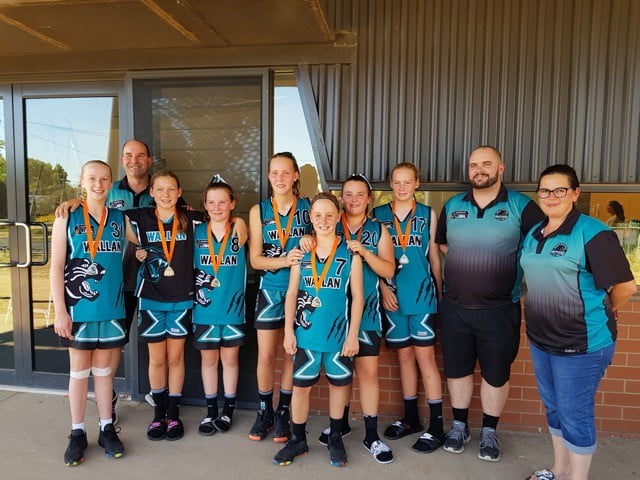 Wallan Panthers’ Under 14 girls representative team went through a north-east Victoria tournament to finish on top of the ladder but fell at the final hurdle of the day.

The girls won all four pool games convincingly, holding each opponent under 17 points while scoring up to 49 points themselves.

Chloe Mott scored 22 points in game one and ended up second on the leaderboard for overall points, with 53 points from four games.

Allie Stewart hit a big three-pointer in the fourth game with just five seconds left in the game.

The grand final against Wodonga Wolves was a tense game played in sauna-like conditions at the Benalla stadium. The courts were extremely slippery and there was plenty of rough play.

The Panthers, pictured above, started well with Jade McLay scoring from the three-point line, but trailed by six points at half-time. They let the lead slip to 10 points midway through the second half. The Panthers clawed back the deficit, with the final score 20 to 17.

Allie Stewart scored with a foul shot on the siren.

“In the toughest game of the weekend, the girls went down to Wodonga by three points after being down by 10 midway through the second half. It was a great weekend by the girls. Hold your heads high and let’s keep working towards our end goal,” coach Graham Robinson said.

Wallan Panthers on the rise before Easter break