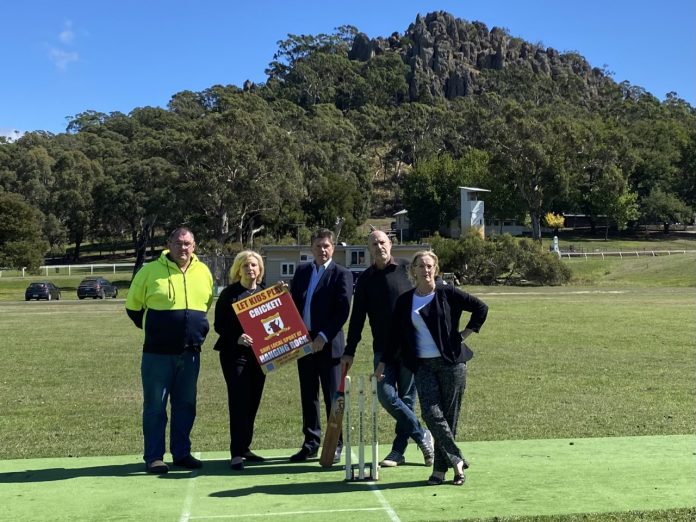 THE fate of Hanging Rock Cricket Club remains uncertain, with its members pushing for plans that detail its abolishment to be reconsidered.

The cricket oval and the clubroom are situated in the middle of the club’s racing track, to the east of the rock.

The Hanging Rock Master Plan, which supports the Hanging Rock Strategic Plan, has determined the reserve should support site-specific uses that link to the natural qualities of the site, and not provide a space for ‘generic leisure or sporting activities’, which could take quality away from visitor experience.

Under the plans, cricket is considered non-site-specific, and all associated infrastructure would need to be relocated to areas that provide better capacity facilities and long-term growth potential.

Proposed upgrades would see the location of the cricket oval turned into an Indigenous song line trail, interpretational area, picnic, and conservational area.

In a meeting on Wednesday with Member for Northern Victoria Wendy Lovell, Shadow Minister for Tourism and Sport Cindy McLeish and Liberal candidate for McEwen Richard Welch, the club’s presidents Stephen Mitchell and Peter Walsh said it was disheartening for cricket, which had been present at the site since the late 1800s, to no longer be a part of the rock’s history.

“The strategic plans have an awful lot to say about heritage activities – generally that they are protected. It doesn’t distinguish between cricket and racing, it just simply says activities that have been here over 100 years are protected,” Mr Mitchell said.

“They have not engaged with the history of cricket here and they say, ‘racing is different’.

“If there is a rationale that makes sense why can’t cricket be here, then okay, but where can we be?”

East Paddock is used to host concerts at the site and sits adjacent to the reserve, with the cricket oval between the paddock and Hanging Rock.

With plans to create a permanent stage structure, the club, with the support of the politicians present, argued the environmental footprint and view of the landscape from the top of the rock would be more damaged than if the cricket oval remained.

“I don’t agree with the car park they’re [going to construct] in the East Paddock because that does impact the views of the rock and the environment,” Ms Lovell said.

“I think that’s a really big issue with the development of East Paddock, that you’ll look down from the rock and see a permanent car park, you will see a building, you will see a stage, it’s not the intention of what the paddock was gifted for … or what the community tells us they want.”

Hanging Rock Cricket Club fields three senior and four junior teams, providing a club for residents in surrounding towns including Newham, Rochford, Hesket and the properties around the rock without a township.

“This is our local sports ground. We don’t have another sports ground to go to and the sports grounds in Lancefield, Woodend, Kyneton are maxed out – they’re barely able to service their populations as it is,” Mr Mitchell said.

Mr Mitchell speculated the reason community sport had been pushed aside was its inability to bring in money.
However, Ms Lovell said other contributions that sport made to the community should be considered.

“There’s an economic benefit of people being engaged, being active, being fit, mental health, encouraging women in sport. Community sport is creating community,” she said.

Macedon Ranges Shire Council is inviting residents to provide feedback on the proposed purchase via an online submission and at an in-person meeting scheduled for May 12.

Online submissions for community consultation will close April 22 and can be made at here.

Member for Macedon Mary-Anne Thomas did not respond to the Review’s enquiries about the plans for Hanging Rock before deadline yesterday.