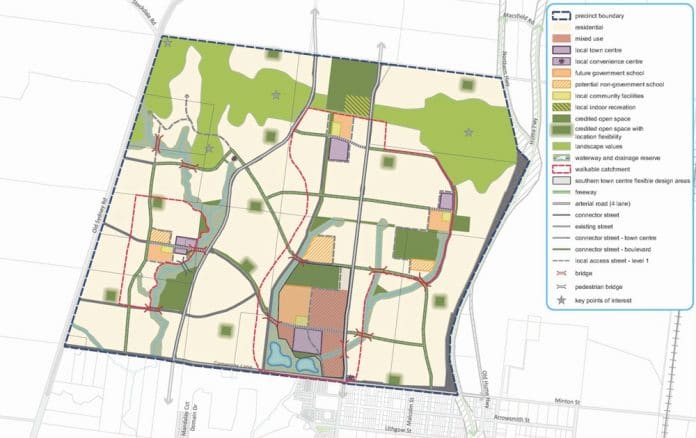 Planning to develop a 1250-hectare piece of land north-west of Beveridge, set to include up to 16,200 homes, is now at the community consultation stage.

The land is bound by Hadfield Road to the north, Hume Freeway to the east, Camerons Lane to the south and Old Sydney Road to the west.

The area is surrounded by Beveridge Central, Mandalay Estate, Beveridge township, Wallan south and Beveridge north-east, each under their own Precinct Structure Plan.

The development is estimated to support about 13,400 square metres of supermarket floor space with 84 per cent of households within one kilometre of a supermarket.

It’s estimated the development will provide employment for 1630 people on an ongoing basis.

The future of a quarry proposed for the area remains under a cloud after Mitchell Shire Council denied a planning permit application.

Minister for Planning Richard Wynne has determined the plan will be exhibited without the quarry shown on the Future Urban Structure, as the PSP aligns with the North Growth Corridor Plan, which also doesn’t show a quarry in that location.

However, according to the precinct’s background summary document, The Department of Jobs, Precincts and Regions recognises the value of the resources in the proposed quarry and recommends the resources be extracted.

Victorian Planning Authority executive director outer Melbourne Alix Rhodes said with no planning permit granted for the quarry, it was unknown if or when the resource extraction would occur.

Ms Rhodes said they expected precinct planning to be finalised by early 2021.
“Once this has occurred, development proponents will be required to obtain planning permits from Mitchell Shire Council, prior to any development or construction occurring,” she said.

“Completion of the development of the precinct is dependent on the housing market, ordinarily we can expect this to take approximately 20 years.”

A key part of the plan is Camerons Lane interchange with the Hume Freeway, which will be required to support the development the area.