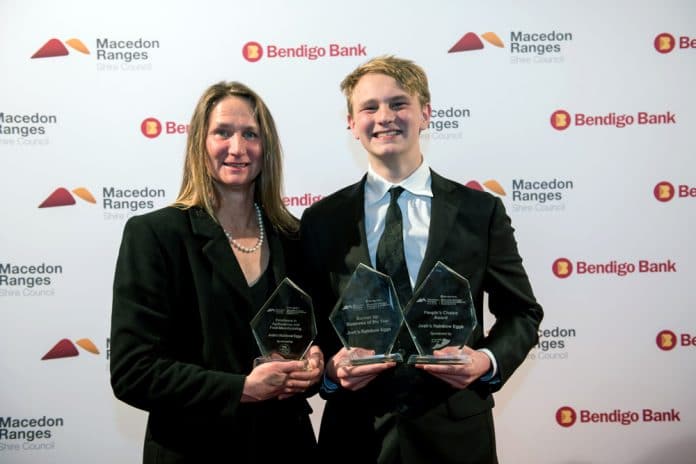 ‘Josh’s Rainbow Eggs’ took away joint winner of the People’s Choice Award, Agribusiness and Food Manufacturing and runner-up business of the year.

Mr Murray and his mother Tamsyn Murray have run the ethical egg selling business for 10 years, building their brand through sustainability and education.

“It was a cool feeling winning the awards, it was nice to be up there and to feel appreciated,” he said.

In 2009, a then nine-year-old wanted to make some pocket money and asked his mum if he could sell eggs from their pet chickens.

From selling to neighbours and farmers markets, 10 years on the family now has 10,000 hens and is on the shelves of 50 supermarkets throughout Victoria, including Coles and Woolworths.

Mr Murray said the awards were great, but what motivated him was continuing on with ethical farming practices.

“Mum and I have a clear idea on what we want to do in the future, it’s about finding that sweet spot of running an ethical business while at the same time growing it,” he said.

Josh has won several awards over the past 10 years, including winning Small Business Champions Award for Agriculture and Young Achiever Award for Environmental Sustainability in 2019.

He is also a finalist in this year’s Victorian Regional Achievement and Community Awards in the Customer Service category. Winners of the state-wide award will be announced on October 11.