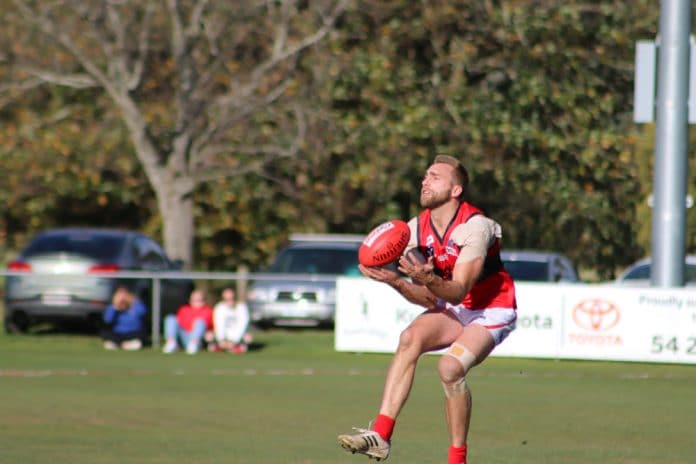 Romsey will look to regroup after a first-up loss to Riddell District Football Netball League minor premiers Diggers Rest in their qualifying final on Saturday.

In the unusual situation of playing an away game on their home deck at Romsey Park, the Redbacks went down to the tune of 37 points.

They will return home this Sunday to take on a red-hot Wallan in the first semi-final.

Romsey coach Corey O’Sullivan said he was disappointed by the loss but the club’s focus immediately turned to the next challenge.

“I’m disappointed but we need to get over that now. We earned the right to the double chance and we’ll take that into next week,” he said.

The finals pressure was evident from the onset, with neither side able to get the advantage or make a significant impact on the scoreboard as Romsey took a one-point lead into quarter time.

It might’ve taken a whole quarter to get going but the Burras made up for it in the second term, kicking four goals to one to take a 19-point lead into half-time.

“I think to half-time it was game on. I know we went into half time three goals down but we looked at it as Diggers weren’t able to score into the wind so we figured it was still game on,” O’Sullivan said.

“Diggers Rest were just able to control the third like a good finals experienced side could and that’s what they did.”

Romsey wasn’t able to reel in Diggers Rest in the third term, allowing three goals and kicking two of their own as the deficit grew to 27 points at the final break.

With goals at a premium, another three goal to two quarter was enough for Diggers Rest to close out the game and book their place in the first semi-final.

“They’re the three blokes who can hold their head up high but we probably didn’t have a lot more than that to be honest. Connor Whelan played a good game through the ruck and
Joel Naylor had a good first half too,” he said.

O’Sullivan said the Redbacks would work on controlling the tempo leading into their do-or-die final.

“That’s been an issue all year, identifying those moments as a playing group.”

The winner of the Redbacks and Magpies this week will advance to the preliminary final to take on the loser of the second semi-final between Diggers and Rupertswood at Clarke Oval in Sunbury, while the loser will go home.

“You’d always prefer to play finals at home but I watched Wallan and the way they defeated Riddell and they played a great game,” O’Sullivan said.

“They’ve come into our ground and beat us handsomely before so I don’t think our ground puts any fear into them and they’ll come in with a hell of a lot of confidence.”