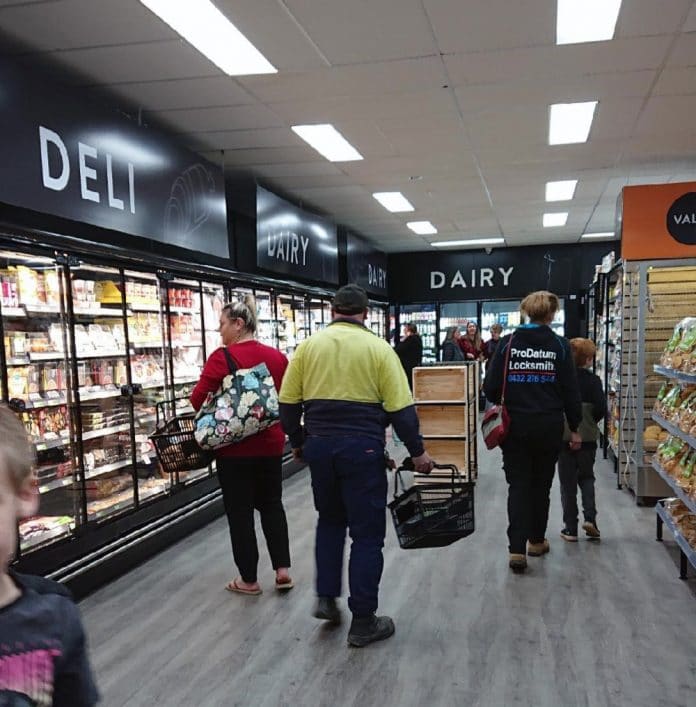 Kinglake finally has its supermarket back with the opening of Kinglake Community Foodworks on Wednesday.

Owners Dora and Geoff Kordos, along with their children Evan, Peter and Alex, have been working on reopening the store since a previous owner closed the store late last year.

Ms Kordos said her family originally built the supermarket 22 years ago so it was good to open in Kinglake again.

“People were literally dancing in the shop. It was amazing, it was surreal to see. It was actually like a carnival in there,” she said.

“It means everything to the people of Kinglake. It’s become their central meeting place again.

“There were people everywhere some were saying they’d never been so excited to be in a supermarket before.”

Staying true to the family heritage in the town, the store has photos on display of the supermarket from its opening day 22 years ago as well as from the old general store which the family previously owned.

Ms Kordos said it was a long and exciting project and a lot of thought had gone into it.

“We’ve tried to cater to a varied demographic. We’re doing a lot of niche products with health and local products,” she said.

“It’s all brand new state-of-the-art equipment. We’ve got a 50kW solar system with panels all over the roof, we’ve got energy efficient refrigeration system and everything is behind doors so there’s no open refrigeration.”

Ms Kordos said she hoped the new supermarket would help reinvigorate the town.

“We hope to service the community’s needs and make it a central place and it’ll reinvigorate the town and it’ll become what it used to be. A lot of the other businesses are reporting that they’re busier now too,” she said.

“It means everything, judging by people’s reactions. It’s almost like a basic human right to be able to do your food shopping.”

Candidate hopes to focus on investment