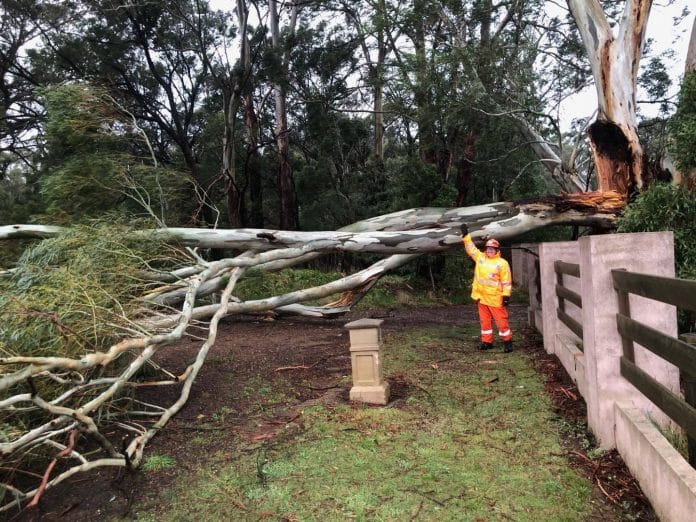 Wednesday night’s storm that pummelled the Macedon Ranges left tens of thousands of residents without power, while many experienced property damage or reduced road access due to fallen trees.

Sustained wind gusts of more than 100 kilometres an hour brought trees and branches down across powerlines, with Gisborne, Kyneton and Woodend the worst- affected areas.

Powercor had restored power to more than 20,000 Macedon Ranges homes and businesses by Sunday.

But as of yesterday, several hundred properties at Blackwood, Woodend and Lancefield were still affected by power outages, more than four days after the storm.

“There are currently about 700 customers still off supply,” a Powercor spokesperson said on Monday morning.

“With extra crews mobilised to support the rebuilding and repairing of poles, wires and other infrastructure, we expect to have the majority of customers back on supply by the end of [Monday].”

Mobile and home phone services were also affected after telecommunications infrastructure was damaged.

Businesses were also heavily affected, with many forced to close due to no power.

VICSES Woodend unit controller Kevin McNare said it was the worst storm he had seen in more than a decade working in the area.

“I’ve been with the service for 12 years and this unit has never experienced anything like this before,” he told the Review on Friday.

The Woodend unit, which also covers Romsey, Lancefield, Kyneton, Malmsbury, and Trentham, experienced the sixth-highest number of calls in the state on Wednesday night.

Across the Macedon Ranges, SES units received more than 1000 requests between Wednesday and Friday, mostly for fallen trees.

“With an event like this the requests for assistance can vary, so [we had] everything from tree-down traffic hazards as the fair bulk of the calls, a lot of building damage, structural damage, and a lot of restricted access so trees across driveways so people can’t get in and out of their properties,” Mr McNare said.

From Wednesday night to Friday morning, there were 23 tree-down incidents reported each in Lancefield and Romsey alone, and a further five in Riddells Creek.

“[As of Friday afternoon] the jobs are still coming in. It’s really about prioritising the jobs,” Mr McNare said.

“There’s been a couple of jobs that’ve come down this morning of trees down with power lines involved. Powercor is out there trying to restore power to some areas, [but] that’s going to take some time. There are power lines down everywhere.”

By Sunday, Vic Emergency reported 90 per cent of Macedon Ranges jobs had been completed, with help from the CFA, DELWP, Parks Victoria, Fire Rescue Victoria and police, in what Mr McNare described as a ‘a truly multi-agency’ clean-up.

Emergency service units from across Victoria travelled to the Macedon Ranges on the weekend to assist with the clean-up.

Vic Emergency has advised that support payments are available to affected people. The Personal Hardship Assistance Program provides a one-off payment of up to $560 per adult and $280 per child (up to a maximum of $1960 per eligible family) and is available for up to seven days after the emergency event. For more information visit https://bit.ly/3cAP1Jl.

For those still without power, temporary shower facilities have been set up at Romsey Park and Lancefield Park. Several roads across the shire are still closed, particularly in the Mount Macedon area.

Romsey and Wallan fall behind

Cosmic country band to take to the stage in Tallarook