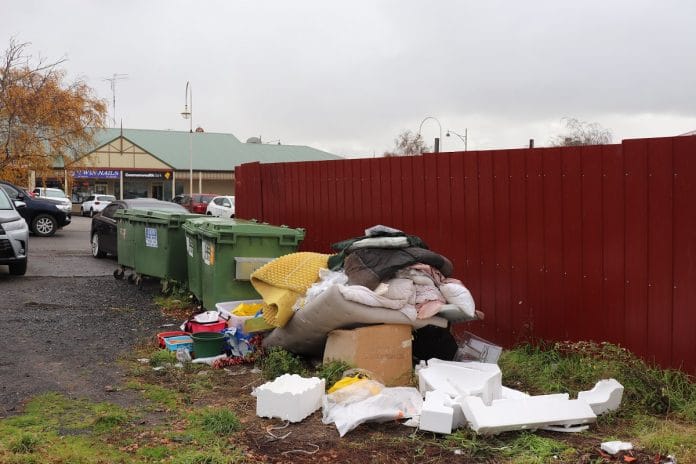 The area behind Kilmore’s vacant Red Lion Brewery has become a dumping ground for household rubbish, angering nearby businesses.

Sarah Meakins, the owner of the adjacent Ferguson Plarre bakehouse at 34 Melbourne Street, said customers regularly complained to her about the rubbish, which she claimed started accumulating about two months ago.

“There’s nobody in the pub now because the last tenants have left, so people think they can just dump their rubbish there,” she said.

“It’s household stuff that’s been left. Everything from mattresses to prams and boxes.

“People come into my shop asking what I’m going to do about the rubbish. It’s very frustrating that we’re a food business and we have to put up with that being next door.”

Ms Meakins said she had been in contact with Mitchell Shire Council and Wilson Partners Real Estate, which manages the owners corporation of nearby shops, about the problem.

She said council had so far refused to remove the rubbish, while Wilson Partners declined to provide her with the information of the owner of the Red Lion building.

“We’ve spoken to the police and they say they can’t do anything because it’s a council issue, but the council won’t do anything about it and Wilson Partners won’t even contact the owner of the building,” she said.

“If anyone else had that on their property or on their nature strip, council would be on their backside.

“I just don’t know what else to do. I’m doing everything I can because everyone is complaining to me about it, and it’s not fair on us.”

Wilson Partners managing director Alan Wilson said dumping was an issue for council and not the owners corporation.

“The owners corporation does not manage that area. Even if we did, there would be a process, but we don’t,” he said.

“It’s a privately-owned area, and I personally believe Mitchell Shire Council should be responsible for taking action with dumping.”

But council chief executive Brett Luxford said that as a private property, waste disposal was the responsibility of the land owner.

“We can confirm council is working with a Kilmore business through our community amenity and emergency management unit,” he said.

“Council authorised officers attended the site and have directed the land owner to remove the litter. We will monitor the situation and the litter will be removed.

“Dumped litter found on private land must be removed by the landowner. Council then ensures the litter is removed through both our local laws and community amenity and emergency management unit,” he said.

“Please stay vigilant and dob in a dumper should you notice anything.”

“Especially now when everybody is concerned with cleanliness, it’s a terrible look to have that sitting there,” she said.

“We need someone to do something.”

NorCen appoints 19-year-old to board of directors