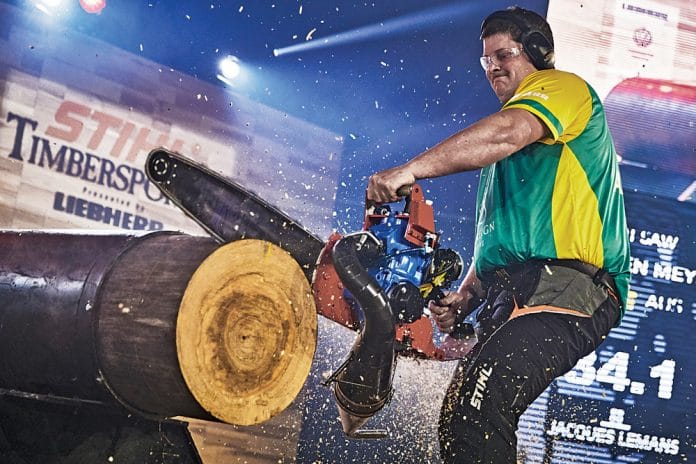 Woodchopper Brayden Meyer climbed to the top of the mountain, winning the 2019 Stihl Timbersports individual world championship in Prague, Czech Republic over the weekend.

His win saw Australia complete a Stihl Timbersports World Championship double for the second year in a row after the Chopperoos won the Team Relay crown on Saturday morning (Melbourne time).

Performing in front of a raucous, sell-out crowd of more than 2700 fans, Meyer held his nerve in a nail-biting Hot Saw competition to take home the title.

Meyer, 24, finished first in four of six disciplines on his way to his first senior individual world title.

As the current world record holder in the Underhand Chop discipline, it came as no surprise when the Australian raced into an early lead, one that he then never relinquished.

As the contest reached its climax, Meyer showed no sign of letting up, storming to an impressive Springboard win in a time of 36.84 seconds.

Meyer then needed only to record a time in the Hot Saw to take home the world title, following a disqualification for his closest rival, Canadian Ben Cumberland.

Despite a non-start he remained calm, cool and collected to do get the job done.

Meyer said he was just trying to stay as calm as possible.

“It’s incredible to come up with the win. To get both golds I couldn’t be happier and to be able to follow in (2018 world champion and teammate) Laurence O’Toole’s footsteps, makes it all the more special,” he said.

“It’s an unreal feeling and really tops off an amazing weekend.”

Meyer, who grew up and still lives in Broadford, has won a plethora of woodchopping titles in his career but the world championship win surely rates at the top.

He was also a part of Australia’s win in the team event – a knockout tournament with teams battling in a relay across four of the six disciplines, Stock Saw, Single Buck, Underhand Chop and Standing Block Chop.

After getting past Poland in the semi-final, the Chopperoos beat arch-rivals New Zealand by two seconds with a time of 47.8 seconds to the Kiwis’ 49.79.