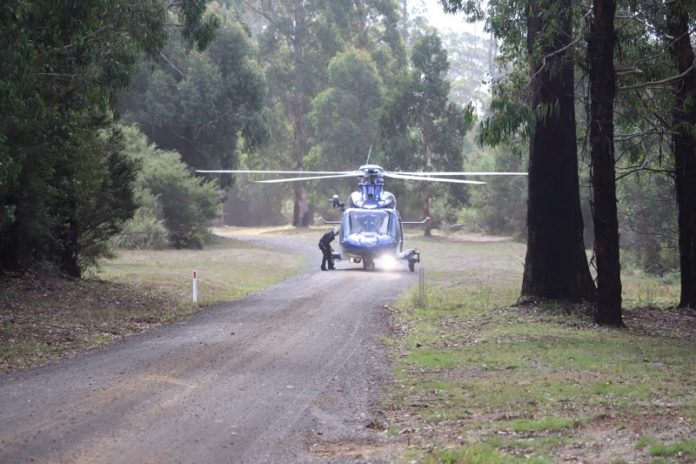 An Australian Transport Safety Bureau, ATSB, report into the fatal helicopter crash at Mt Disappointment has detailed the two helicopters travelling together being confronted with a ‘wall of cloud’.

Five people died in the March 31 crash in the Mt Disappointment State Forest, between Heathcote Junction and Whittlesea.

The bureau released a preliminary report last week as part of its ongoing investigation, outlining factual information from the investigation’s early evidence-collection phase.

The report contains no analysis or findings, which will be detailed in the final report.

The helicopters, operated by Microflite, departed from Batman Park Heliport in Melbourne, for a flight to Ulupna on the NSW-Victoria border, each with a pilot and four passengers on board.

ATSB chief commissioner Angus Mitchell said both were operating under visual flight rules, which permit pilots to operate only in visibility conditions generally clear enough to allow them to see where their aircraft is going.

“As they approached Mount Disappointment, the pilot of the first helicopter noted the layer of cloud below was rising and becoming broken, while the base of the cloud above appeared to be lowering, resulting in the clouds appearing to converge ahead of them,” he said.

“The pilot reported they were then confronted with a ‘wall of cloud’ in front, and to the left and right of their track, and broadcast to the other pilot their intention to turn around.”

The pilot of the first helicopter recounted to investigators that the pilot of the second helicopter, which was trailing about three kilometres behind, might have been confused by this broadcast.

The first helicopter pilot then broadcast ‘U-turn, U-turn, U-turn’ to the second pilot, and conducted a sharp left turn onto a southerly track.

The ATSB’s survey of the accident site determined the helicopter collided with a large old growth tree trunk before hitting the ground about 250 metres south of the last recorded data point.

Much of the wreckage was destroyed by a post-impact fire, however investigators found no evidence of any pre-existing defects that would have affected the helicopter’s operation.

As well as interviewing the pilot of the first helicopter, investigators have also spoken to the operator’s chief pilot, and collected passenger statements, operational and maintenance data, onboard recording equipment, and meteorological data.

“As the investigation continues the ATSB will attempt to download and analyse data from the helicopter’s onboard Appareo camera, which may have recorded video and audio of the accident flight, plus the pilot’s iPad, which was being used to run an electronic flight bag flight planning app, as well as avionics equipment from the helicopter,” Mr Mitchell said.

Investigators will also analyse other aspects relevant to the accident including the weather data, the helicopter’s maintenance history, the pilot’s qualifications and experience, witness information, the operator’s management systems, and the training and flight review standards for commercial helicopter pilots.

Sharing books with the Whittlesea community

Next step for park