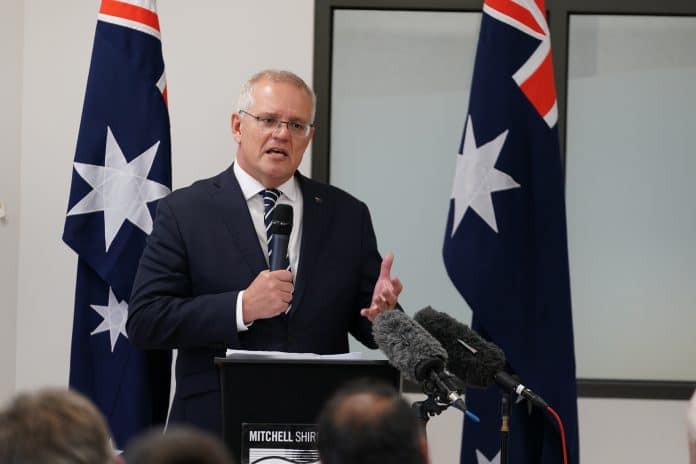 SCOTT Morrison visited Beveridge on Friday, the first time a sitting Prime Minister had visited the McEwen electorate since Julia Gillard in 2013, as part of the Liberals’ effort to prise the seat from Labor at this weekend’s election.

Beveridge’s Lithgow Street was a hive of activity during the Prime Minister’s visit, with a group of about 20 Health Services Union-affiliated protesters gathered outside the centre an hour before Mr Morrison’s arrival, along with a sizeable media pack, but the Prime Minister gave them the slip by sneaking in a back entrance.

Mr Morrison did not take questions from the assembled media but used his speech at the event to present a vision of McEwen as a place of ‘strong families … and strong communities’.

He said the BIFT, a freight hub planned to service the government’s Inland Rail project between Melbourne and Brisbane, was the only way to make that vision a reality.

“People will come, the houses will be built and the infrastructure will be put in, but whether those communities will be self-sustaining in the future depends on jobs. That’s what makes the difference,” he said.

“The BIFT … ensures this part of north Melbourne can become an economic hub. It rapidly transforms the local economy.

“[Deputy Prime Minister] Barnaby Joyce and I put this in the budget because we knew how important it was as part of our economic plan.”

Mr Welch said the project would create an ‘economic centre of gravity’ for the region.

“What that means in practice is that young families will not have to get up before dark and drive long distances home and that young kids have more time with their parents,” he said.

“For me, the BIFT is a reason to get up every morning, roll up my sleeves and get working for this community. It’s an essential, intrinsic part of our overall strategy for a sustainable community.”

Mr Morrison took a stab at incumbent Labor Member for McEwen Rob Mitchell, who he said was against the BIFT.

In response to questions from the Review, Mr Mitchell said he was in favour of the BIFT, but that freight industry leaders preferred a Western Interstate Freight Terminal, WIFT, in Truganina to be built first.

The Labor State Government and the Victorian Transport Association have also stated their preference for the WIFT to be built first.

Mr Mitchell said he was also sceptical of the government’s ability to complete the project by its stated date of 2027.

“It’s another ScoMo lie. I’m on the record as saying I support the BIFT, but industry has said they need the WIFT first. It’s not my choice because I obviously want the BIFT, but it’s also not going to miraculously bring down things like the cost of living and childcare,” he said.

“We need jobs, but if we look at their record of delivery it’s a long way off. It needs the Inland Rail to be done, and … they’ve only been delivering about 15 kilometres a year and it’s $4.5 billion over budget.

“These jobs they’re talking about are at least five to seven years away. We need jobs now and we need manufacturing now. We’ve got commercial buildings that are sitting empty, waiting for businesses.

“We could do steel manufacturing, engineering – all jobs that are available and ready to go now, but the government has done nothing to help the real small businesses.”

Mr Morrison insisted Mr Welch would do more to provide jobs if elected.