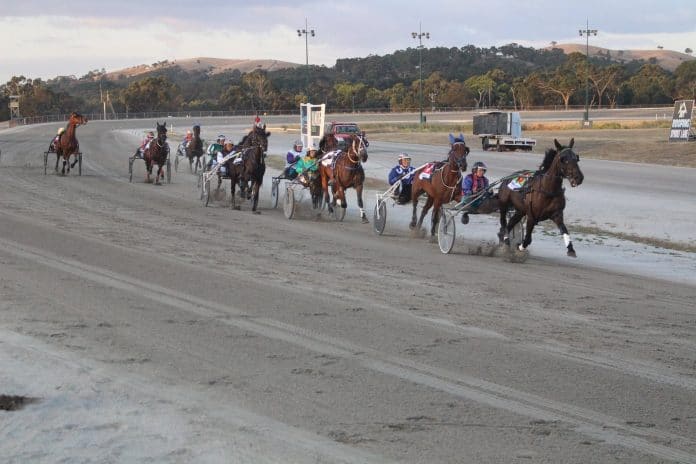 A massive 12 event program at Kilmore on Thursday featured plenty of action throughout the night including winners from across the region.

Beginning fast from gate three, Hephaestus Phoenix trotted faultlessly at the head of affairs to register an easy 14.5 metre margin in advance of the David Aiken stablemates Hes A Hammer and Pesco Pollo who was 2.5 metres back.

Given a sweet trip one/one from outside the front line, Im Miss Royalty after easing three wide on the home turn ran home nicely to score by three metres over Surprise To Me along the sprint lane off the back of the pacemaker Will Patrick in a rate of 2-06.2 and in doing so, brought up three wins in succession. Chrisken Kiosk, after a slow start, ran on late from a long way back for third.

Settling three back in the moving line from gate two on the second line, Regality, after easing three wide in the final circuit, followed Ima Bad Molly, which had taken over after racing exposed into the final bend and finished best in a punishing finish to prevail by a half neck. Stormboy Star was third after following the winner home albeit 5.9 metres away. The mile rate 2-04.3.

The Shinn family made it a double after five-year-old Sportswriter-Shanghi mare Atlantas was successful in the OKR 98.3FM Pace over 1690 metres.

Settling three back in the running line from gate two, Atlantis followed Four Loney Nights forward three wide in the last lap and ran home best to gain the day by 4.4 metres in 2-00.6 from Waiting For Love from the tail. Four Lonely Nights battled on strongly for third a head away.

A winner on the same track on January 13, Rolling Remona, driven by son Kevin, settled mid-field in the moving line after starting from gate two on the second line.

Gaining a three wide trail forward in the last lap on the back of Kellys Ideal ahead of her, Rolling Remona despite making the final bend four wide, rattled home to register a 1.2 metre victory over Playful Miss and Lancefield hope Four Ever A Star, which raced exposed finishing a head away. The mile rate 2-01.9.

South Oakleigh part-owner-trainer Steven Vasiliou was successful with seven-year-old mare Bettathanapokeindeye, which at start number 33, landed the Momentum Gaming Pace over 1690 metres with Ellen Tormey in the sulky.

After angling to be three wide into the home turn, Extortion ran home solidly to gain the day by 3.1 metres over Monegeetta hope Ears Ponder, in the death seat – behind leader home turn, along the sprint lane, with Will And Andy third, 8.8 metres back. The mile rate 2-04.8.

The $7000 J and A Mazzetti Pace Final for those that qualified on January 23 went the way of Rockbank trainer Anthony Spiteri’s smart five-year-old American Ideal-Taylor Kate gelding Joshua Richard.

Junortoun caretaker trainer-driver Ellen Tormey led throughout aboard five-year-old gelding Mister Artikulate to land the Carlton and United Breweries Pace over 1690 metres, defeating a game Neander Guy in a mile rate 1-59.4. The winner is listed as being trained by Ellen’s father John at Charlton.

Kilmore harness races are on again on Friday.

No new date for Kilmore Cup