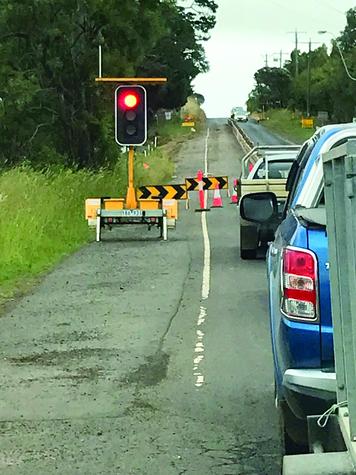 A WALLAN man has questioned traffic management practices surrounding a development on Darraweit Road after workers erected barriers bringing the road down to a single lane of traffic for more than two weeks.

Mark Walsh is a resident of Darraweit Road, west of Wallan, and said he was incensed when the road was restricted to a single lane of traffic to accommodate a development near its intersection with Rowes Lane.

Construction workers placed barriers along the road with lights at either end to let traffic through. The barriers and lights were removed on Thursday after being in place more than two weeks.

Mr Walsh said there was no reason barriers and lights should have been used.

“The barriers and lights [were] there 24-7, so even when they’re not doing any works from the road we’re stuck with these lights and there’s no other way to get around it,” he said.

“Last Saturday I had to wait for three sets of lights before I could get through. I had to sit there for 15 minutes and there wasn’t even anybody working there.

“That way they’re not holding up the general public 24 hours a day because they want to do it the cheapest way possible.”

Mr Walsh said residents were given no advance warning about the changes, and he had received conflicting advice when he complained to Mitchell Shire Council.

“I’ve talked to [council] engineers and they told me they were doing road works on that side of the road so they couldn’t have us driving down there,” he said.

“But on different days they’ve had different sides of the road blocked off, so the only reason they’ve blocked it off is so they can lift in their concrete sleepers from the road and not from their side of the development.

“The head of the team said they use permanent barricades on projects all the time, but that’s on main highways. They’re doing critical infrastructure in those cases, it’s not a private developer working from the road.”

A council spokesperson said the developers had completed a road management plan and that drainage, water main and retaining wall works related to the development were carried out on the roadside, necessitating the barriers and traffic lights.

The spokesperson said water main boring works were completed on Thursday last week and the road had subsequently been re-opened to two-lane traffic with reduced speed limits.

“Any works undertaken on public roads need approval from the relevant road authority. Council provided this approval based on the submitted traffic management plan,” the spokesperson said.

“Council monitors the implementation of the traffic management plans to ensure they are followed.”

Mr Walsh maintained the barriers and lights should not have been left in place.

“I work in construction and whenever we do jobs around Melbourne you’ve got to get permits and deal with councils,” he said.

“Other councils say ‘you’ve got to work between these hours, the site has to be cleaned up and you’ve got to be off the road by this time’.

“This council let them put permanent barricades on the road 24-7, and the only reason I can see for that is so the developer doesn’t have to pay traffic management while they’re working there each day.”

Caring for Whittlesea’s most vulnerable