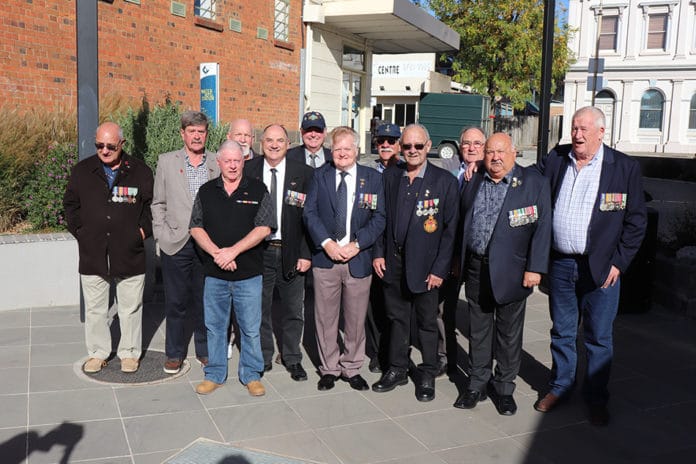 A group of veterans from the 110th Signal Squadron visited Kilmore to march in the town’s Anzac Day march, along with resident Chris Yates.

The group all served in Vietnam and many choose a different Victorian town to visit each Anzac Day.

Mr Yates moved to Kilmore in 2016 and has marched in Kilmore every Anzac Day since.

The original plan of his good friend Graham Cunningham, from Alexandra, who Mr Yates met on his second tour, joining him at the Kilmore march soon escalated into a dozen veterans from the 110th squadron descending on the Mitchell Shire.

“Because we’re far flung, from various places in Victoria and two couples are from South Australia – some we’re in regular contact with and others it’s just once a year and it’s great,” he said.

Veterans of the squadron from as far away as Adelaide, Korumburra and Albury also joined Mr Yates.

While he didn’t serve with all of the veterans, Mr Yates said he considered them all brothers in arms.

“I got to meet most of these guys on my second tour, there are a couple who were between my tours but because we all served in the same squadron, we’re brothers in arms,” he said.

“You know, blood’s thicker than water. We’re all family and this is a regular occurrence every year. The Victorian map is hit with a dart and there’s a town and that town is visited by this group but because we’re here, they decided to come here to Kilmore this year.

“It’s a tradition of ours to do the dawn service and march and retire to a place of hospitality where we’ll have an occasional frothy and tell tall tales.”

The veterans started their day with a traditional gunfire breakfast of coffee and rum, which Mr Yates said was only because it’s tradition and not because they enjoy it, followed by the dawn service and breakfast before they marched.