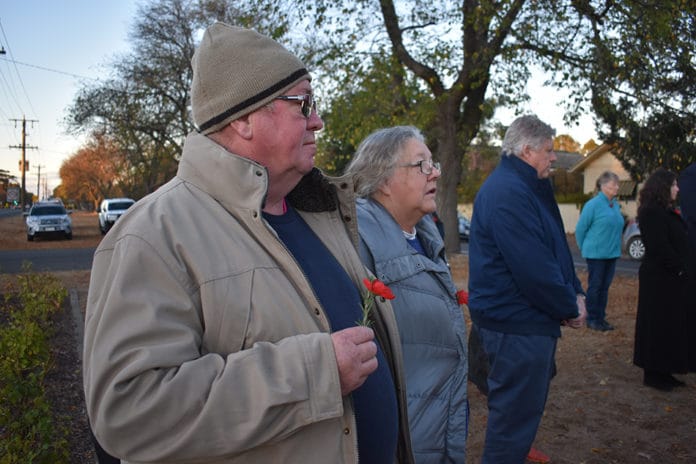 Residents from all walks of life gathered throughout the Macedon Ranges to remember those who have made the ultimate sacrifice.

The Romsey Lancefield RSL sub branch held two Anzac Day services – at the Romsey and Lancefield Cenotaph – in support of veterans and their families during the Anzac and Poppy Appeals.

“I’m getting older now, I’m 71 and it’s more important to me now than it ever was,” Mr Knell said.

“I served in Vietnam and in 1997 I was diagnosed with PTSD because I worked in theatre triage and I had to get away from Melbourne – I would recommend it to all servicemen.”

He said the Lancefield community had helped him get through his hardest times.

“I had great neighbours that really helped me because I was going through a bad time, a real bad time, and they helped me as well as the CFA – it’s a fantastic community,” he said.

“Just to see the amount of people here today is staggering and children putting poppies in the garden is wonderful.”

Romsey resident Luke Kilduff brought his two sons down to the Romsey service to educate them on the significance of Anzac Day.

“It’s important for them to understand the sacrifices that they made for us and our country,” Mr Kilduff said.

The Lancefield service included a parade march, a song from the school’s choir, a wreath laying ceremony and the last post with a minute’s silence.

“I always think it’s a great opportunity for the community to catch up and for people to be able to talk to some of the returned servicemen about their experiences,” Ms Philpotts said.

“The Neighbourhood House committee along with other volunteers provided a great morning tea with lovely cakes, quiches and sandwiches – they’re great cooks and organisers.”

Historians back to work