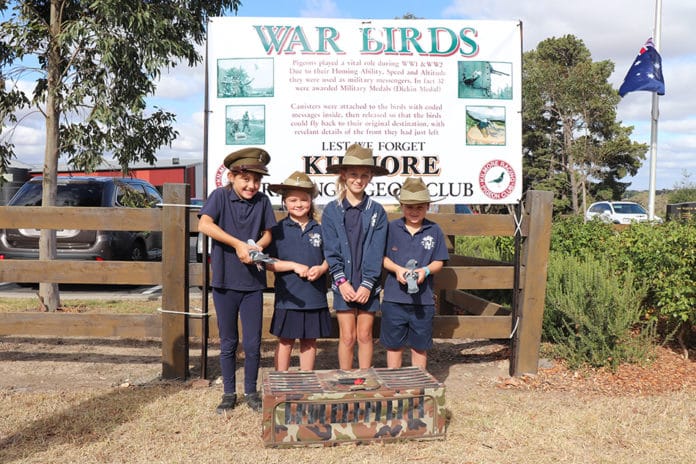 Beveridge commemorated Anzac Day a little differently this year, closing its service with the release of 10 homing pigeons.

The release of the birds commemorated the significance pigeons played in communications during World War One and World War Two.

Before radio and other more modern technology, pigeons were used to relay messages from the front to bases and camps.

Beveridge resident Bernie Keenan and Kilmore Racing Pigeon Club member Charlie Grech put their heads together and designed and printed a banner for the day telling the story of how pigeons helped our diggers.

Mr Keenan said he had been coming to the Beveridge service since it began in 2001 and wanted to something different this year.

“We got together and put a banner together with a little story to fill people in with what’s going on, Charlie contacted one of his members who brought 10 birds along and we released them at the end of the service,” he said.

“Pigeons played a big part in the wars with communications because of their homing ability. There’s no way they had radio in those days, so therefore, they had to have some form of communication.

“They would put a coded message into a canister on the bird’s leg and release the bird it would fly back to its point of origin.

“They would take the message, decode it and find out what was going on in the front and what was required for the armed forces to do.”

Mr Keenan said people had shown interest in the story behind the pigeons.

“So many people have come up and read the banner to get the background on why we released the pigeons,” he said.

Mr Grech said it was great to be able to contribute to the Beveridge Anzac Day service.

“It’s great because it lets everyone know how important the pigeons were. The pigeons are also supporting the people in Beveridge here today because they were part of the war along with the veterans,” he said.