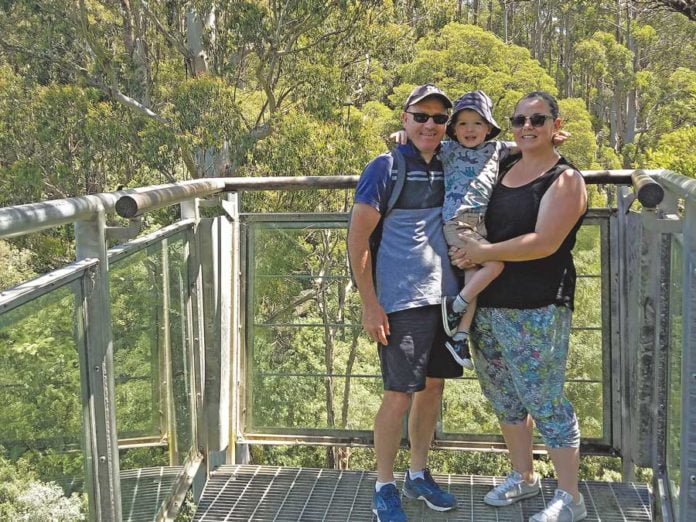 AN IRISH family from Seymour are at risk of being deported after their three-year-old son was diagnosed with cystic fibrosis and considered a ‘burden’ on the health system.

Christine and Tony Hyde came to Australia in 2009 on a Working Holiday Visa and have since spent a decade working and raising a family in Seymour, Victoria.

Mrs Hyde is an acting principal at Broadford Primary School and her husband works for Skybus while volunteering for the State Emergency Service in Seymour.

In 2015, the couple put in an expression of interest form for permanent residency and received a first round invitation to apply on August 3, 2015.

“During this time I was heavily pregnant with my first child. Part of our application was that you need to sit a medical assessment – we couldn’t do this until six weeks after my caesarean with Darragh,” Mrs Hyde said.

“We then had to add him to our application and they asked for a letter from our GP to state his health. Eight weeks after are a heel prick, it was confirmed that Darragh had Cystic Fibrosis.”

Cystic Fibrosis is a genetic condition that causes thick, sticky mucus to build up in various organs that can impact the lungs and digestive system – there are many mutations of the condition.The couple then sent a letter from their GP to a medical officer who asked for more information on Darragh’s case.

“We sent another letter from a paediatrician and received a reply that Darragh has a severe case of cystic fibrosis,” she said.

“The Home Affairs department responded saying Darragh would need to rely heavily on the health system to have access to an organ donation. They said he would be a ‘burden to the state’ and rejected our application.

“I remember that day at work when I read the email, I crumbled and someone had to drive me home.”

From that point on, the Hydes hired a lawyer who advised them to appeal – a process that’s still underway.

During the appeal process, Darragh started taking a medication called Kalydeco – a drug covered under the Pharmaceutical Benefits Scheme – that helps improve hydration and mucus clearance.

“It has changed his life in the last 18 months, there is less mucus in his lungs, which makes him less prone to infections and has had no hospital admissions.

“He goes to childcare twice a week. He’s just like every other child.”

The family are ready to appeal their final case to the Administrative Review Tribunal on April 30.

They also started a petition, that has attracted more than 13,000 signatures, in the hope of drawing community support to help the family avoid deportation.

Federal Member for McEwen Rob Mitchell said the government needed to recognise the contribution Christine and her family made to the community.

“The refusal of the visa would further disadvantage some of our most vulnerable children,” Mr Mitchell said.

“As someone with a Masters in Special Education from La Trobe University, Christine is a specialist qualified teacher working with students with particular learning difficulties in primary, middle and secondary schools.

“Special Education Teachers are on the medium and long-term Strategic Skills List of the Combined List of Eligible Skilled Occupations 2019. These are jobs in which we have a shortage here in Australia, and we are in need of skilled practitioners to address this shortfall.

“Teachers like Christine are among the most valuable members of the Australian community, charged with huge responsibility.

“I believe Christine’s abilities and talents in supporting the Australian children with special needs far outweigh the possible cost of care to Australia for her young son.”

The North Central Review tried to contact the Home Affairs office for comment, but they did not respond.

COVID vaccines for people over 50 available at Kilmore District Health...