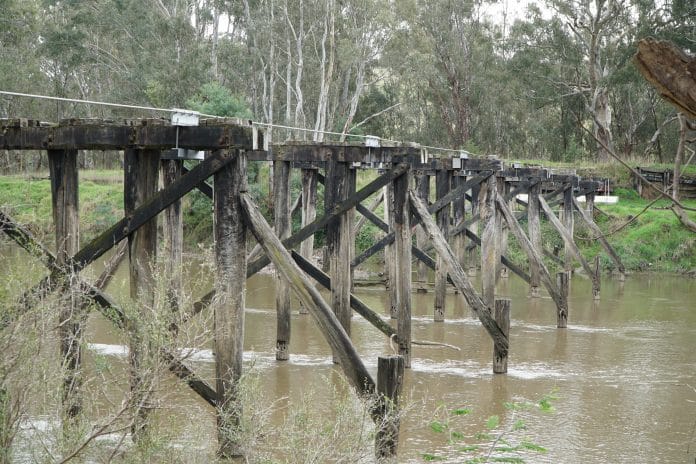 THE restoration of Seymour’s Old Goulburn River Bridge is a step closer after Heritage Victoria provided in-principal support for a Mitchell Shire Council plan to revive the structure.

In March last year coucillors endorsed a $4.3 million strategy to restore the bridge, which was built in 1863 and closed to all pedestrian traffic in 1998.

The proposed rehabilitation methods include the complete replacement of some dilapidated elements, as well as splicing and other methods of mechanical strengthening of weakened structural timber.

Councillors expected detailed structural designs to be finalised and a formal application for a heritage conservation permit to be submitted before the end of last year.

Cr Fiona Stevens said it was another exciting step forward for the bridge project, which members of the Seymour community had long advocated.

“[The option] that councillors and the community preferred … was basically [to have] the bridge rebuilt in a manner that if you stood back and looked at her, she looked pretty much the same,” Cr Stevens said.

“Obviously the engineering techniques would be very different to what was carried out in the 1800s when it was first built.”

Cr Stevens said there was still plenty of work to be done on the project.

“The next steps are … to obtain a conservation permit and finalise detailed designs … and costings to be brought back to us in March or April of 2022,” she said.

“We will hold our breath and hope that that is what comes before us in a very timely manner. We look forward to hearing it on behalf of the community.”