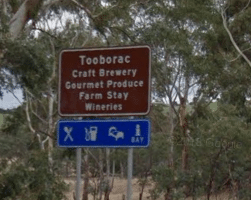 Businesses in small towns on the Mitchell Shire’s northern border are pleading for a more localised approach to COVID-19 restrictions in future, after trudging through extended lockdowns despite low cases.

Tooborac, a town of 300 residents, has only ever recorded two cases of COVID-19 in the past 18 months, but has been locked down as part of the Mitchell Shire because of climbing cases at its southern end.

“There has to be boundary somewhere, but when you live at the northern end of the boundary, and I don’t think there were active cases or exposure sites, it becomes difficult as a business,” McIvor Farm owner Belinda Hagan said.

Ms Hagan, who also owns a butcher and deli in Tooborac, said although they were allowed to remain open, the business had taken a bigger hit this year than it did last year due to travel advice steering people in neighbouring towns away from the Mitchell Shire.

But adhering to the six reasons to leave home, Tooborac residents have been permitted to travel beyond their 15km radius for essential services.

“We’re allowed to go to Heathcote with masks and QR codes [to shop] but those customers aren’t allowed to come here,” Ms Hagan said.

Tooborac Hotel and Brewery owner James Carlin said while he was thankful to be out of lockdown now, the local government area-approach had made little sense.

“I could drive 17km up the road and go to Heathcote where it’s fully opened and has been for months … and then our little pub, which employs 30 people, has been shut,” Mr Carlin said.

Most of the Mitchell Shire’s cases in this outbreak, which caused its lockdown in September, were in Wallan, the shire’s biggest town, 52 kilometres south of Tooborac.

“If we had a myriad of cases here in Tooborac, it doesn’t mean that should shut down Kilmore. There must be granularity that’s better than what it is today.”

Tooborac was previously part of the McIvor Shire until 1994, when most of it was transferred to the Greater Bendigo Shire.

“They moved the boundary to halfway between Heathcote and Tooborac, and it just doesn’t make sense that we would be lumped in with … the growing areas in Wallan and Kilmore,” he said.

State governments nationwide have followed the local government area-approach to lockdown for most of the pandemic. When Premier Daniel Andrews employed a postcode approach to locking down Melbourne in July 2020, there were similar frustrations among residents who said they lived under restrictions while their neighbours across the street did not.

Member for Euroa Steph Ryan has been calling for a more localised approach to lockdowns during this outbreak, saying rural residents who have little interaction with others have been unfairly impacted.

“Mitchell Shire residents continue to be subject to prolonged lockdowns, while other shires with a greater number of exposure sites and more cases are not,” Ms Ryan said.

“It is a fact that the majority of confirmed COVID-19 cases have been found in the southern end of the shire, given its close proximity to Melbourne’s and outbreaks in the northern suburbs.”

Ms Hagan said an approach based on council wards, population density or postcodes could benefit small towns – particularly those on the edge of local government areas.

“I’d hate to be the person making the decisions but I’d like to think … if we can actually live with this, [we could] create more localised borders that would hopefully make fewer towns suffer,” Ms Hagan said.