Home Sport All in on Sports Hub 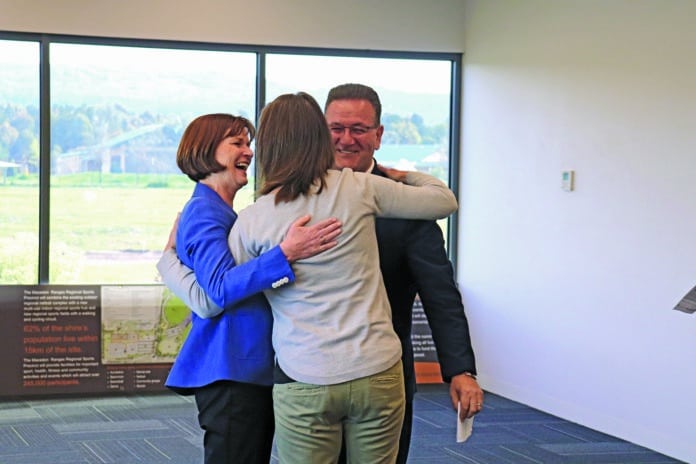 MACEDON Ranges residents could be one step closer to the sports facility of their dreams, with the promise of a further $6 million in funding for the Macedon Ranges Regional Sports Precinct from a re-elected Labor state government.

The $6 million will help deliver the indoor portion of the Macedon Ranges Regional Sports Precinct, with four indoor courts including a show court and spectator seating, new change rooms, multipurpose rooms and other amenities to be integrated with the existing Macedon Ranges Netball Complex.

The commitment comes after $5.6 million for the outdoor portion, including new sports fields, new tennis and netball courts, and outside play spaces for local families, was promised by Premier Daniel Andrews’ Labor government in August.

The total commitment of $11.6 million would go a long way to delivering the project, but funding would still be required from both council and the federal government to see the project to completion.

This comes on top of council’s planned $10.7 million contribution and $100,000 in support from AFL Victoria.

It was an emotional announcement for many of the volunteers who have worked tirelessly to get the project off the ground.

“You can’t even describe it. Probably about a week ago, we were maybe a little resigned to the fact it wasn’t happening now which was devastating because the region needs it so badly,” Ms Collins said.

“I think it really proves just how much this facility is needed so this was the best news I’ve had since I had my kids.”

“It has just been an incredible community journey and I think it’s uniting for the first time to have towns, sports, sporting groups, community groups and schools all unite, it makes it something special,” Ms Condron added.

Mr Eren said the potential investment will mean Macedon Ranges’ sporting stars might finally have the facilities they deserve.

“We’re very focused on making sure sports precincts like this not only survive but thrive going forward so more members of our community can take part in the sports they love to do,” he said.

Ms Thomas said when the Premier announced the $5.6 million for the outdoor component, it was apparent the community needed more assurance the project would be delivered in full.

“This is more than just an investment in new courts – this is a real investment in local clubs and our local community,” she said.