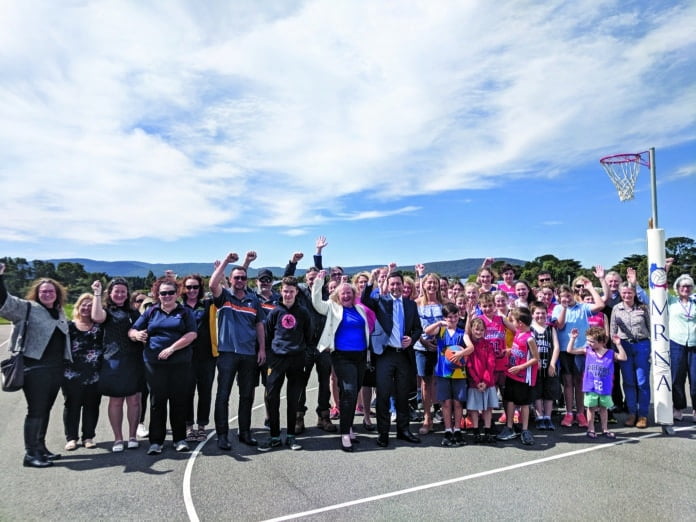 THE Liberal Nationals have called the Labor government and raised the stakes, committing $15 million to building the Macedon Ranges Regional Sports Precinct if elected next month.

The funding would cover both sections of the sports precinct, the indoor Macedon Ranges Regional Sports Hub and New Gisborne Sports Fields projects.

It is a $3.4 million improvement over the Labor government’s commitment of $11.6 million, made with the additional commitment of $6 million last week.

Liberal candidate for Macedon Amanda Millar and Opposition Leader Matthew Guy visited New Gisborne on Monday (October 22) to announce $9 million for the Sports Hub and $6 million for the sports fields.

The indoor sports hub is to be used for basketball, netball and futsal, and also feature a dance studio and an auditorium for large events. The indoor facility could also be used by outdoor sports in times of inclement weather.

Ms Millar said she has been working hard with our local sport clubs to find the financial support needed for this important community infrastructure.

“In the Macedon Ranges, the local population has grown by around 10,000 people in the last decade but there’s been no extra funding for local sport clubs to cater for this growth,” she said.

“As a result, our local sport clubs have been forced to do more with less.

“There’s more work to be done but this is a good start to get back in control of the pressure local population growth has put on community sport.”

“We all share the same vision, to develop a premier sporting destination for the Macedon Ranges,” Ms Stork said.

“Council has been working in partnership with local community groups and sports associations to advocate for this and we are really excited that we are making significant progress through these funding commitments.”

The precinct project could be constructed in two stages, with the first stage to cost approximately $31.4 million, and a future second stage at a cost of an additional $10 million.

“Make some decisions and get on with it”: Ire over Kilmore...

What are dry stone walls and why are they protected in...