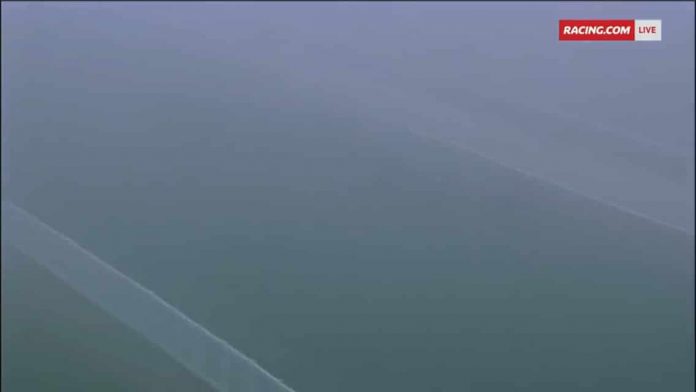 The Kilmore races hit the headlines on Thursday but not because of the thoroughbreds – it was the fog.

Racing commentators were describing the weather as ‘extraordinary’ and ‘crazy fog’, but those who live or know Kilmore are well aware this type of fog is not unusual.

The ‘pea soup’ fog impaired vision for everyone in front of the grandstand, including race caller and stewards.

It was only when horses were well into home straight that they came into vision, making it difficult for racecaller Ric McIntosh to do his job.

However jockeys had no issues with being able to see clearly, and Racing Victoria stewards deemed it safe.

“The view on your screen is what I’m looking at. You can’t see much, can you?” McIntosh said.

“They are off. And your guess is as good as mine.

“I apologise, but we aint seeing a thing.”

It didn’t make good viewing for punters at home either, with cameras only able to pick up vision of the horses emerging from the back straight, before the horses disappeared into the fog and out of sight.

“We’ll hear them come thundering down the straight before we can see them at the moment,” McIntosh said.

It was not until about 150 metres left in the race, that the horses could be seen, just before the finishing post.

“It’s different. I’ve never ridden in these conditions before, apart from trackwork,” he said.

“From our point of view its fine. It’s up to the stewards if they’re happy not to see us go around.”

Josh Duggan one of many local winners at Kilmore harness races