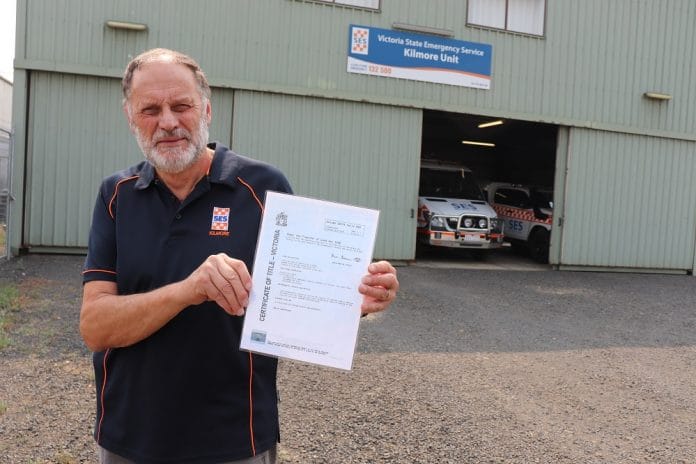 Kilmore’s SES unit will soon be able start work on some much-needed upgrades as the title of the land on White Street has officially been transferred to Victoria State Emergency Service.

Once council rezoning is finalised, the unit can apply for grants that it was previously denied as the land wasn’t owned by the unit or the SES.

Kilmore SES unit controller John Simpson said the unit had a difficult time attracting funding for upgrades to its site.

“We made applications for grants and we kept getting knocked back on all these grants and eventually we got reasons for the knockback in that we didn’t own the property,” he said.

“The government and other organisations that were making the grants wouldn’t let us have the money for something that might be taken over in six months for something else.”

The first thing the unit wants to do is to replace its current doors to allow more room for vehicles and members in its shed.

Vehicles were smaller when the shed was first built, but now members have to squeeze between vehicles and contort themselves to get in when called out.

“We’re allowed eight minutes for a road accident from the time the pager goes off to having a truck out the door, regardless of where our members are coming from, and when you’re spending two or three more minutes opening and closing doors and that sort of thing, that makes a big difference,” Mr Simpson said.

“A person’s life is on the other end of it. Something like played electric roller doors that automatically close after you’ve gone, things like that mean no one’s hanging back to close the door and then the truck’s waiting for that person to get in.”

Other upgrades the unit wants to make is to cover its training and sandbag collection area and improve its indoor training room and disabled access.

When the Shire of Kilmore and Water Board split in 1990, the water board then became owner of the property.

Mr Simpson said he wanted to thank members for the effort they went to during the process.

“Some of them put a lot of time into going through old paperwork, some of it going back 30-plus years,” he said.

“To [SES facilities and capital works manager] Justine Phelan, she and her team have been very helpful and thanks to the councillors that supported us.”