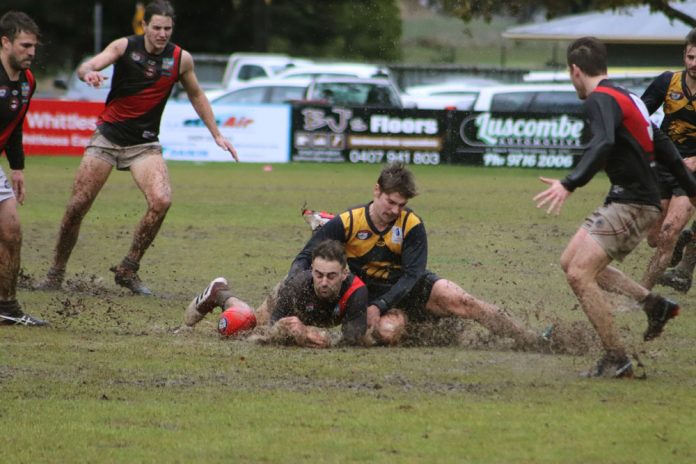 Whittlesea braved awful conditions at home to take a four-point win over Eltham on Saturday.

A wet and muddy ground slowed scoring to a crawl, making every goal mean so much more to both sides.

Eltham took a three-point lead into quarter time after kicking the game’s only three behinds to that point.

The Eagles were able to get on top in the second term, kicking two goals to one to lead by a goal at half-time.

The Panthers were able to hold Whittlesea scoreless in the third term, adding two goals to lead by seven points at three-quarter time.

Whittlesea’s defence in the final term was key to the win as the Eagles held Eltham scoreless while kicking 1.5 to hold on for the win.

Eltham was able to go deep in their forward 50 with 30 seconds remaining but the Eagles pushed back and held off the Panthers’ last-ditch effort, getting the ball out of bounds as the final siren sounded.

Whittlesea coach Blair Harvey said he was happy to get away with the four premiership points in ‘very ordinary’ conditions.

“We were really good defensively in the fourth quarter and our efforts through the midfield got us over the line. We kept working really hard and it was stoppage after stoppage but they kept pushing through which was great to see,” he said.

“Our work rate throughout the whole side was great. We knew it would be a hard slog and we couldn’t give up anything, so it was pleasing the boys kept fighting into the last 30 seconds where they got the ball up near the goal line and our boys were able to hold on.

“It was a great team performance, everyone stood up on the day but Matt Atta was great all day and Nat Stefanile was great in the ruck.”

The win moves the Eagles up to third on the Northern Football Netball League division two ladder, a game clear of Thomastown and behind Eltham on percentage.