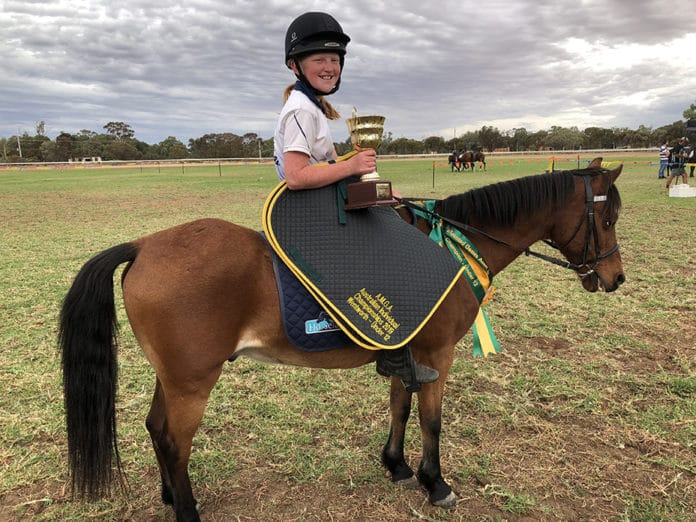 Willowmavin resident Seren McKeever has taken out the under 12 national title at the Australian Mounted Games Individual Championships in Wentworth over Easter.

The 11-year-old has been riding in the games for five years and after leading all weekend, the final came down to a run-off between her and her best friend.

“She was up all weekend but then it was back to zero and race hard, then it came down to the run-off which was very nerve wracking,” she said.

Mounted games are a series of races on ponies that combine different games with balls, cones, drums and flags to test the agility, strength, stamina, speed and skill of both riders and ponies.

Seren eats, sleeps and breathes riding ponies and was drawn to the games by her aunt Niree Weybury, who represented Victoria, and family friend Andrew Rodaugham, who is a international referee and coach.

While Seren’s pony Bam Bam isn’t the fastest, Ms McKeever said Seren made up for it with her skill.

“He’s really not that fast but he knows what he’s doing and Seren’s skill also makes up time at drums, cones and turns so he doesn’t have to be the fastest pony when you’ve got the skill combined,” she said.

Seren said she had a lot of fun racing all weekend.

“It was fun. I’m very proud. I worked very hard. There was heaps of training and all the other comps that I’ve done to get the skill to go to nationals,” Seren said.

Mounted games is an international sport with more than 30 countries participating and winning an Australian championship could lead to Seren competing in world championships down the line.

The whole family’s joined in on the fun too with Seren competing against two of her cousins while Ms McKeever and her sister Niree also competed in the over 25s.