Home News Left in the dark 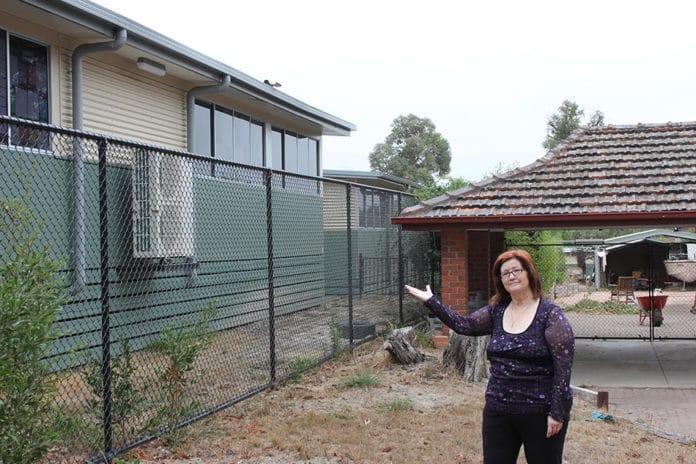 A battle over portable classrooms at Wandong Primary School being placed close to a neighbouring fence is causing privacy issues for resident Karen Fishchmann.

Ms Fischmann has resorted to shutting out natural light in her home due to her privacy concerns.

In 2017 and 2018, four demountable classrooms were installed across from Ms Fischmann’s fence line, with classroom windows overlooking her property.

Ms Fischmann said she was particularly concerned with views that allow students to look into two bedrooms and over her washing line.

Both bedrooms have their blinds and awnings constantly closed for fear of students looking inside – leaving her and her stepdaughter in the dark quite literally.

Since the demountable buildings have been installed, Ms Fischmann contacted the school’s principal several times and did not receive a reply.

Ms Fischmann said she would like to co-operate with the school and has asked them to place shutters or blinds on the classroom windows so the school could still control the amount of light that enters the classrooms.

She said shutters or blinds would reassure her that students couldn’t look over her property.

Member for Euroa Steph Ryan contacted the Minister for Education in December last year about the privacy concerns, but had not heard back from either the Minister or the Department of Education.

The Victorian School Building Authority responded to Ms Fischmann and offered to plant trees on her property.

“They suggested planting trees on our side of the fence. They were going to be tiny little trees which take 15 years to grow,” she said.

The Victorian School Building Authority rejected Ms Fischmann’s suggestion of adding shutters to the classroom windows saying the maintenance would be too costly.

Since hearing no reply from the school principal or the Department of Education and Training, Ms Fischmann said she was disappointed with the lack of support.

“It feels like the Education Department don’t care one iota about our privacy – we can’t even open our shutters – I like to have them open and have fresh air come into the room,” she said.

Following the North Central Review interviewing Ms Fischmann on April 22 and seeking a response from the Department of Education and Training, a spokesperson yesterday said, in a statement on behalf of the school and the authority, that it was aware of Ms Fischmann’s concerns.

“We have worked proactively with her to address her concerns. We have installed frosting on the classroom windows to ensure students and teachers are not able to see into her property,” a spokesperson said.

“Shade cloth is scheduled to be installed along the boundary fence to further ensure her privacy is maintained.”

Colmont teachers left ‘devastated’ for students and without answers