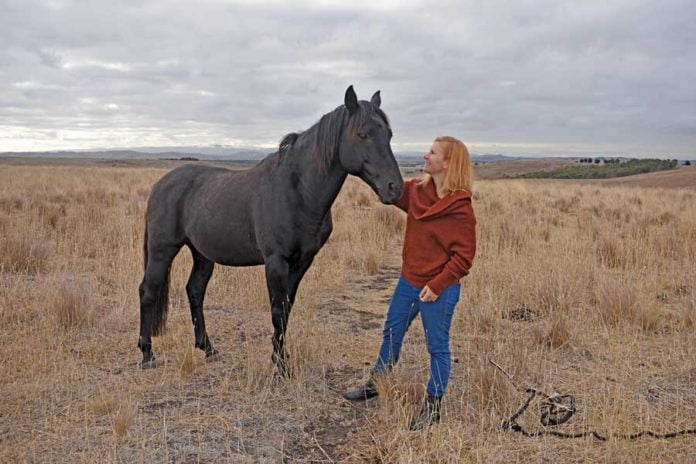 Clarkefield’s Jess Liston is fighting to preserve and honour Australia’s Anzac history through a diminishing Australian horse breed that was designed for war.

For the past 12 months she has been working with Walers, named because they were originally a New South ‘Wales’ breed.

Best known for their loyalty, strength and stamina, Walers were exported around the world in the 19th and 20th centuries as artillery and support to soldiers.

Walers are loyal animals and have temperaments close to a family dog than other types of horses – sadly they are close to extinction.

“A lot of them were bred out in stations for the First World War and when that ended a lot were shot or sent away,” Ms Liston said.

“When soldiers got told they were coming home, they were also told that their horses weren’t coming with them – wonderful and heartbreaking news at the same time.

“When some of the men sailed out on the ships their horses drowned swimming after them – it was their best mate.”

Ms Liston believes part of the reason the breed is not well known is because the soldiers were too heartbroken to talk about it.

“So many men, women and horses fought in this war and we need to honour them. If we honour the people before us it will honour the future generations,” Ms Liston said.

“And I think about how proud the men must be that we are going to try and save their horses.”

Ms Liston has learnt there is a small number of wild Walers still in the Northern Territory and is planning visit in the next few weeks.

“There is an elderly gentlemen in his 80s who is pumping water for them from a station’s bore because of the drought,” she said.

“We only have limited time to get them back before it starts raining and they disperse – we could lose them forever.

“My mum is coming with me, we are flying up and will hopefully bring them back and rehomed by Anzac Day.”

Ms Liston has set up a Go-Fund-Me campaign to raise money for the horses to be rehomed.

“It’s a large project that requires a lot of logistics, feed, handling and finding good homes for these animals,” she said.

“They saved us, now it’s our turn to save them.”

For more information on the campaign or if you are interested in re-homing a horse contact Jess on jess@innerrhythm.com.au or visit https://www.gofundme.com/save-the-waler.