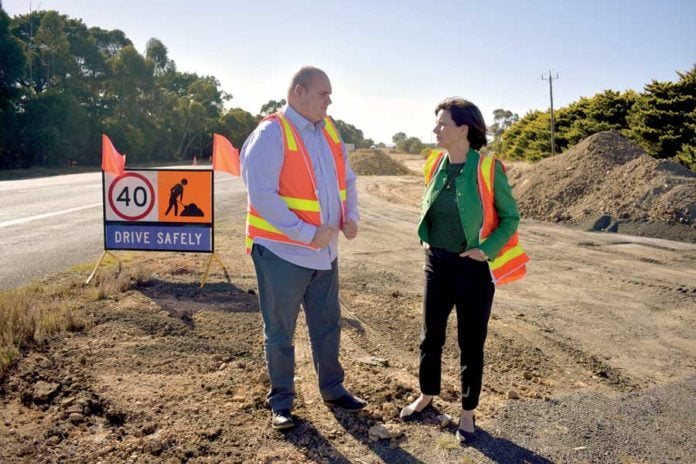 One of the three notorious intersections in Gisborne is under redevelopment after several complaints on its safety and design.

A total of $1.3 million has been invested into the Saunders Road, Kilmore Road and Pierce Road intersection and works are underway for new turning lanes, street lighting and traffic islands to help improve traffic flow and visibility.

A school bus stop has also been relocated away from the intersection to minimise congestion and safety concerns for students and parents.

Roadworks will continue throughout the day and the speed is reduced to 40km/h until the project is finalised.

Member for Macedon Mary-Anne Thomas spoke on the importance of the project.

“For a long time we’ve received complaints from local residents about this intersection and it’s one Regional Roads Victoria have been working on for some time,” Ms Thomas said.

“There are a few of these in Victoria that are proving to be hazardous with visibility and safety.

“We’ve made an election commitment to also fix the other two intersections. Preliminary work has been done on the Saunders-Station road intersection and traffic lights will being installed – it’s the best and safest idea for traffic with childcare and aged care residents on either side.”

“So this project will create much better visibility for all road users not just for motorists and trucks but a growing cycling community – people who are using different modes of transport,” Mr Haugh said.

“We have been working with the community and local residents here in redesigning and realigning the intersection.“We plan to deliver by the end of June.”