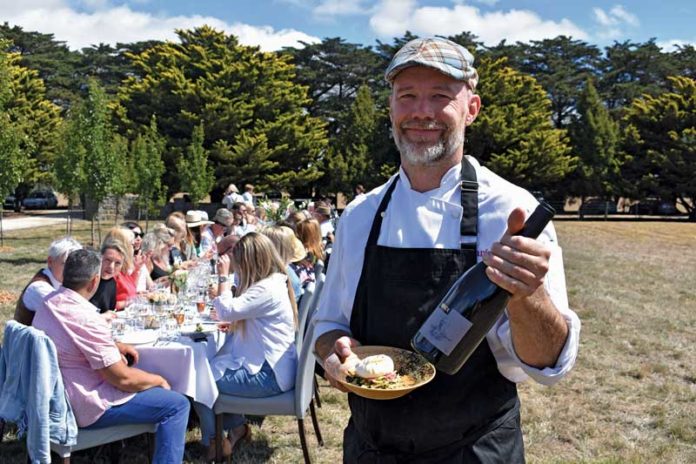 The Macedon Ranges is cementing its reputation as a beacon for gastronomy with hundreds of people travelling to Melbourne Food and Wine Festival events in the past week.

Events at Gisborne and Lancefield were among 250 on the festival calendar.Glen Junor Belted Galloways farm in Gisborne hosted the ‘Regional World’s Longest Lunch’ on Friday, showcasing regional produce and the expansive backdrop of the property to a table of 70.

Baringo Estate executive chef Tim Austin – who organised the event – said the Macedon Ranges was becoming a mark on the map for tourists.

“The idea was to look at what we were doing a few years ago and what we’re doing now to create a retrospective lunch”, Mr Austin said.

“We’ve used local beef from this farm, herbs from our gardens and almost 20 kilograms of ricotta sourced in Romsey.

“We’ve matched out produce with wines from our local winemakers including Bindi Winegrowers, Curly Flat, Hanging Rock and Place of Changing Winds – we used their past and present wines.

”Mr Austin said events such Melbourne Food and Wine Festival would continue to open up unknown parts of the Macedon Ranges to the wider public.

“It’s great for the region because we are part of the MFWF and the area may not have been on people’s radar previously,” Mr Austin said.

Gisborne Collective owner Nathan Presley – who also worked on the event – noted the talent growing in the region.

“I’ve just come from Thailand where I visited 12 Michelin star restaurants for inspiration in our restaurant.

“I’ve refreshed and ready to get back into it.”

Toolern Vale resident Denise Drew attended the long lunch in Gisborne and said the location was convenient for tourists.

“We’re not that far out of Melbourne, only 40 minutes,” Ms Drew said.

“The station is right next to Baringo Estate, so I think it’s great for the amount of people coming into the area.

“We will see some great local produce, so I’m excited to try that and meet some interesting people.

”Owner of the Glen Junor Belted Galloways farm Joe Gauci said the lunch provided a perfect backdrop for people to see and smell what they were eating.

“We’ve got so many things to see here and access is so easy from the city,” Mr Gauci said.

“I think Macedon Ranges is the poor brother to the Mornington and Yarra Valley but I think we’re slowly catching up.