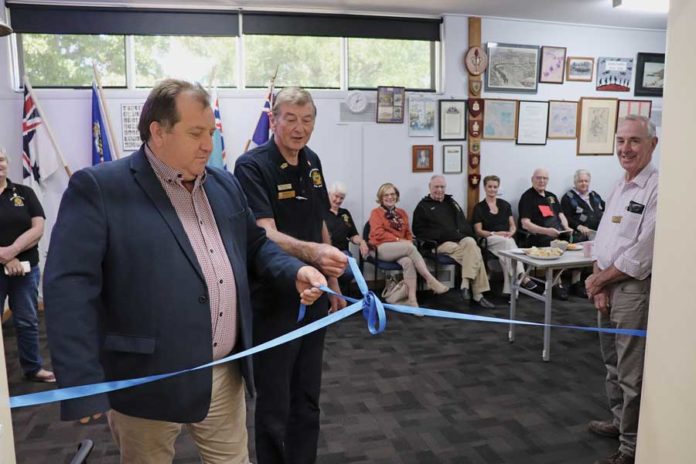 KILMORE Wallan RSL will be able to better serve its 100-plus members after the opening of a new kitchenette on Thursday.

Funding of $45,600 from the Department of Veterans’ Affairs Veteran and Community Grants allowed the club to upgrade kitchen facilities and provide a safe and useable environment within the RSL.

Member for McEwen Rob Mitchell joined members at the club’s Kilmore base for the opening.

Previously, the RSL’s kitchen was essentially a small wardrobe with just a boiling water system and a sink.

With help from Kilmore Soldiers Memorial Hall committee and council, the RSL was able to take over the hall cleaner’s cupboard for the new kitchenette while Kilmore businessman Ray Wittmer paid to have a new cleaning cupboard built at the back of the hall.

The new kitchenette features sinks, storage, a microwave and a fridge which will help the RSL entertain its many members.

The upgrades pair with the hall’s $8,250 Stronger Communities Program Grant which funded a replacement burner stove, refrigerator and air conditioner to improve safety and promote further use of the hall for community programs.

Kilmore and District Community Bank Branch of Bendigo Bank also donated new tables and chairs to the RSL to replace its aging furniture.

Kilmore Wallan RSL Sub Branch president Rod Dally said it was great to see everyone working together to help complete the kitchenette.

Member for McEwen Rob Mitchell said it was easy to be part of the grant process for the project.

“You know when you support grants like this and get involved that it’s for the greater good, and the value of the project, it’s going to outweigh any financial contribution because you know the people behind the grant are people of the highest calibre,” he said.

“This just looks beyond amazing, it’s just fantastic and it’s going to give you a new lease on life.”