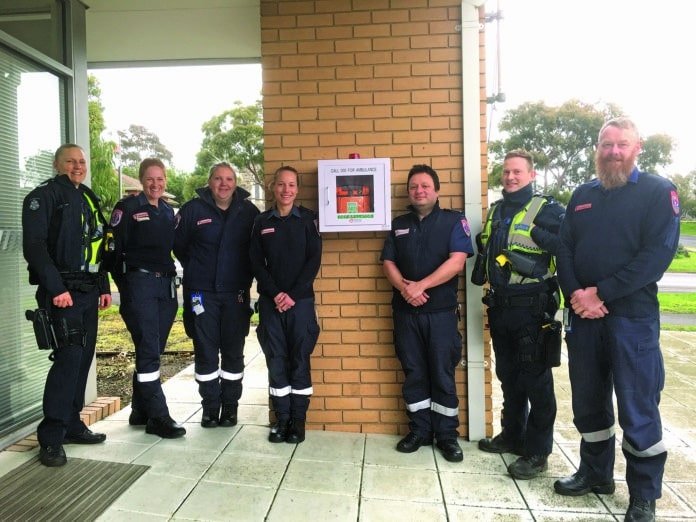 “We had community funds given to us by members of the community and, we usually buy training equipment, we purchased an AED,” he said.

“This is in conjunction with the GoodSam program which will hopefully help the community… we hope people will come grab it and use it. The first few minutes are vitally important to someone’s life.”

GoodSAM, a smartphone app, is rolling out following a four-month pilot phase where more than 1100 Ambulance Victoria paramedics registered as GoodSAM responders.

An army of responders is set to grow into the thousands as registrations open to trained professionals such as firefighters, lifesavers, doctors and nurses.

“GoodSAM will play a key role in helping save more than 6000 Victorians who suffer a cardiac arrest away from hospital every year. We’ve already seen lives saved as a result of the app, when off-duty Ambulance Victoria paramedics helped to save the lives of patients after responding to a GoodSAM alert,” he said.

“The two lives saved in pilot phase proves that GoodSAM is transformative technology for patients in cardiac arrest and highlights the impact trained bystanders can have in the critical minutes between a Triple Zero (000) call and emergency services arriving.”

Every minute without CPR and defibrillation reduces someone’s chance of survival from cardiac arrest by 10 percent.

“We have an army of responders on board already. Victorians shouldn’t be surprised if an off-duty lifesaver, doctor or firefighter arrives within minutes – they may be in their pyjamas but they are there to help save your life,” he continued.

“It takes a community to save a life. And we are growing this community – a community that before this technology wouldn’t have even known someone just a few hundred metres away needed their life-saving skills.”

Associate Professor Walker said that while GoodSAM was an exciting innovation, it wasn’t a replacement for Victoria’s emergency services.

“When it comes to cardiac arrest, seconds count. Bystanders have a vital role to play while emergency services make their way to the scene, and GoodSAM is all about harnessing that,” he said.

The GoodSAM app allows trained and trusted medical professionals to become ‘Good Samaritans’, sending an electronic call for help when people nearby are in cardiac arrest.

It does so using GPS technology, notifying up to three responders of the patient’s location and the closest defibrillators while emergency services are on their way.

Visit here to find out more about GoodSAM and becoming a responder.

Generosity through the roof in Wallan