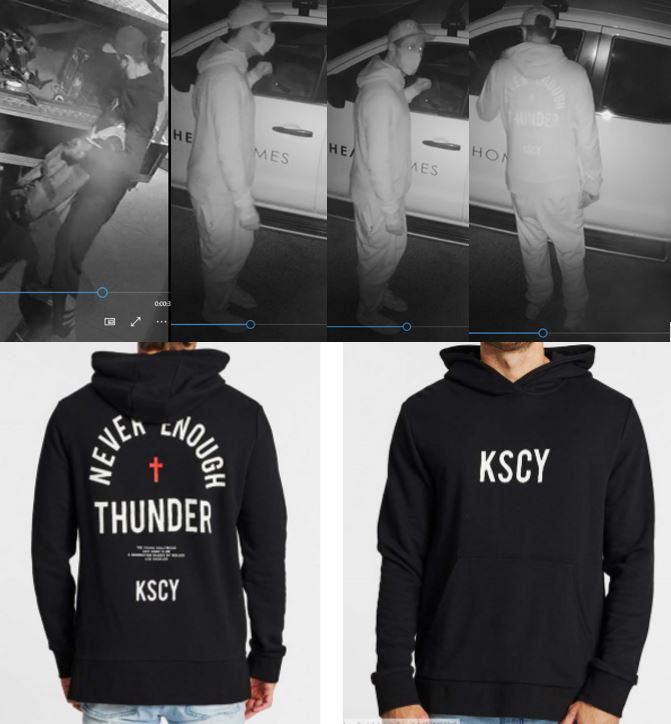 Mitchell Crime Investigation Unit detectives are appealing to the public to help identify a man after a string of late-night thefts, including that of a car, in Beveridge two weeks ago.

Investigators have been told that at least seven cars were broken into around Mandalay estate in Beveridge between 2am and 4am on the morning of Wednesday, September 23.

Items stolen from the vehicles include wallets, tools and personal items.

Detectives believe the same offender is also responsible for the theft of red Mazda Bravo ute from an Abbey Road address about the same time.

The stolen Mazda was located on Bendigo Street, Mickleham the following day.

Police have released images of a man who they believe can assist with their enquiries.
The man is perceived to be Caucasian in appearance, with a medium build, and was wearing a distinctive KSCY hoodie.

First Constable Tom Rossetti said the thefts were potentially opportunistic and reminded residents to lock their cars at night.

“At this stage we have no suspects identified local or otherwise,” he said.

“Judging on the timeframe, the suspect was casing out the area for a couple of hours.”

Investigators are appealing for witnesses or any persons who may have CCTV footage that captured anything suspicious in the area to contact police.

Anyone with information is urged to contact Crime Stoppers on 1800 333 000 or submit a confidential report online at www.crimestoppersvic.com.au

Distracted drivers in the spotlight