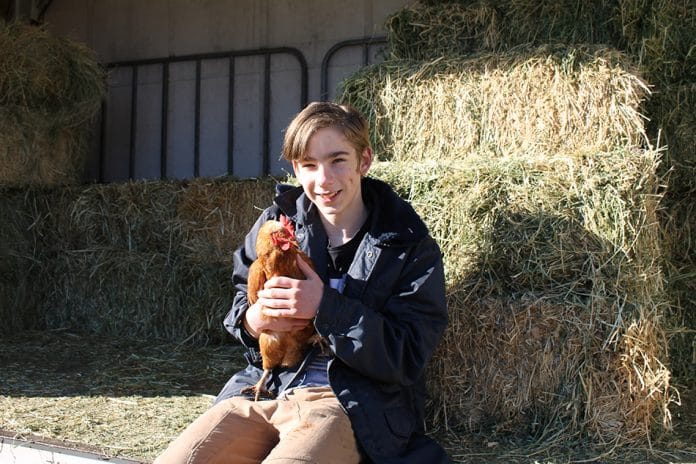 Daniel has 80 of his own chickens that he cares for, breeds and collects eggs from to make cakes and cupcakes for the Seymour community.

“I collect the eggs and breed them. Sometimes I incubate some of the chickens too. I put them in a broody box and give them turkey salad crumble and they eat that for a while,” Daniel said.

“When they’re big enough, I put them in the chook pen, but in a cage so the other chickens don’t hurt them.”

Daniel said he used the eggs to make cakes and cupcakes but also sold them at his cake stall – $6 for a dozen – so he could buy more food for the chickens.

“Every Friday, I wash all the eggs, and during the week too when people want the eggs,” Daniel said.

“I sell about four cakes each weekend, two large cakes and two small cakes. I also sell about 15 or 16 cupcakes.”

Daniel’s mother Annette Hickey said she was proud of her son’s hard work and commitment.

“I’m proud as punch. He’s doing something constructive. He has to get up and feed his chooks in the morning before he goes to school and he’s got to feed them when he gets back home,” Ms Hickey said.

“He sits up there normally from about half-past nine until one, or until he’s sold out.”

Ms Hickey said Daniel had regular customers and one of them had nick-named Daniel, ‘Dan the Egg Man’.

“He’s got a bloke up the road that buys a cake off him every week. So he’s got his regulars,” she said.

Daniel and his mum spoke about one of the chickens he had named ‘The Crazy Old Hen’.

Daniel said his friend sometimes helped him sell his eggs and cakes.

“I have a friend who lives in Murchison and every two weeks, he comes over and sells my eggs and my cakes with me,” he said.

Daniel sells big cakes for $10, smaller ones for $5 and cupcakes for $1 each.