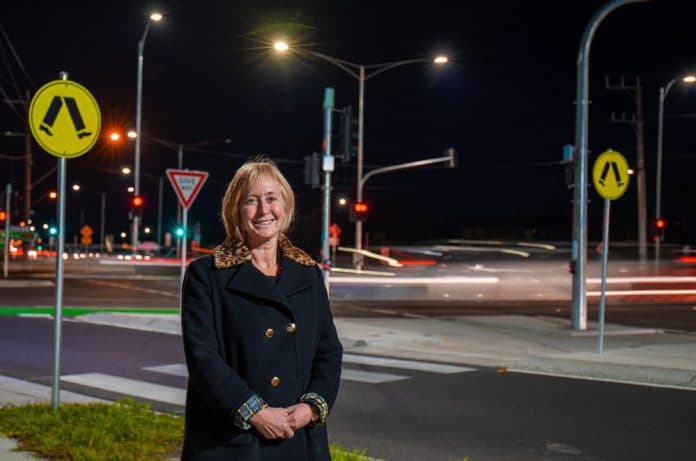 NEW overhead street lights at the O’Herns Road and High Street intersection in Epping were switched on last week with Member for Thomastown Bronwyn Halfpenny visiting the new intersection to officially flick the switch.

The lights are one of the final pieces of the first stage of the O’Herns Road Upgrade.

Major construction on the new intersection was completed in February – replacing the roundabout with traffic lights.

The new lights can be controlled by the neighbouring CFA branch in times of emergency.

About 30,000 drivers travel through the new intersection.

“Melbourne’s north is one of the fastest growing regions in the country, and the completion of the first stage of the O’Herns Road upgrade is a vital improvement this government has delivered,” Ms Halfpenny said.

“These new overhead lights will ensure that drivers making their way through the new intersection of O’Herns Road and High Street can do so safely at all times of the day and in any weather condition.”

The O’Hears Road upgrade project has also been given environmental approvals for stage two, which will duplicate the road between the Hume Freeway and Redding Rise and build three new intersections with traffic lights.

Stage two will develop a new interchange at the Hume Freeway and add extra lanes on the freeway between O’Hearns Road and Cooper Street.

Ms Halfpenny said she was thrilled to be a step closer to a fully duplicated road.

“We’ve been advocating strongly for the second stage of the O’Herns Road upgrade that will better connect communities in our northern suburbs. This is a big win for local residents,” she said.

“Melbourne’s north is one of the fastest-growing regions in the country and we need these improvements to keep traffic moving and make sure locals are getting where they need to go quickly and safely.”

Awards for students and teacher