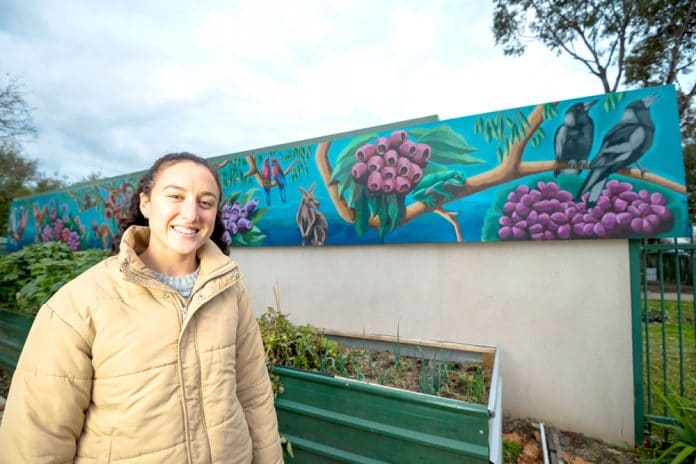 ARTIST Med De Young noticed when she first moved to Whittlesea that the community house needed a splash of colour.

Ms De Young, who had moved to Whittlesea from Preston, approached the Whittlesea Community House to pitch her project idea and they accepted.

The artist wanted to use the rolling hills of Mt Disappointment as the backdrop to her mural.

“I had the idea of scenery and Australian wildlife – with everything that’s happening in the news with global warming and Australia having the highest extinction rate for mammals in the world – I wanted that to be the focus,” she said.

The photography and visual arts graduate ran workshops with primary school students to bring the mural design together.

“There’s a bit of everything on there – birds, the Australian dingo because they’re critically endangered and koalas too,” she said.

Ms De Young has also completed a mural on the East Preston Community centre.
“It’s a mural of hands holding flowers that are native to the Darebin area,” she said.

The process from organising workshops to painting the mural was a positive experience that Ms De Young said helped her integrate into the community.

Man allegedly travels 155km/h with child in the car