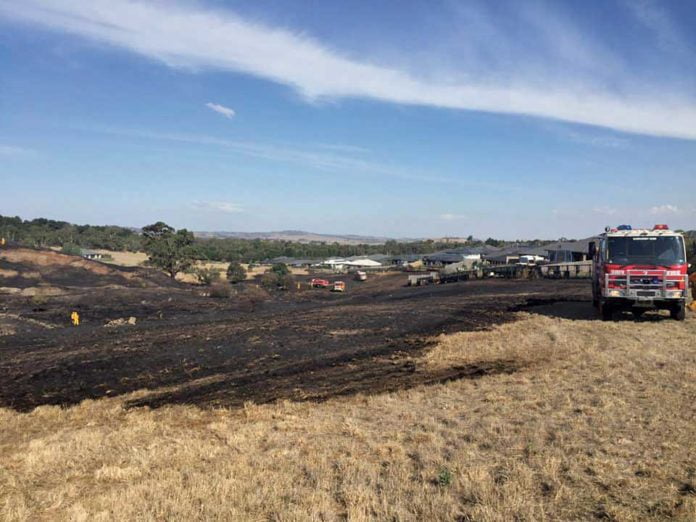 An out-of-control grassfire that burnt fences and narrowly missed homes at Springridge Estate in Wallan is being treated as suspicious.

About eight to ten acres of grassland was damaged after the fire broke out at about 1.50pm on Saturday in the ridge between Pretty Sally Drive and Speargrass Avenue.

“The CFA are so quick. I can’t believe how fast they got into position to put it out,” Sen Sgt Conlin said.

“The police are treating the fire as suspicious and are following a number of enquiries.”

District 12 operations officer Justin Dally said it became evident over the weekend that many residents didn’t have a fire plan.

“With an interface type fire – that’s when a bushfire runs into residential areas that affects a number of properties at the same – many residents believed they were not at risk,” Mr Dally said.

“If you have grass at your back fence there is a risk, it might be small, but still a risk.

“What is your plan regarding yourself, your family, and your pets?

“It can be simple as standing back 100 metres from the fire or fire edge and making sure the roads are clear for fire services.”

Mr Dally also noted on the timely response from from CFA members and volunteers.

“Many CFA volunteers had a great, fast response where no structures were lost with a fire that had plenty of potential,” Mr Dally said.

“There were 15 trucks from as far away as Craigieburn and Whittlesea.”