Home News King of the road 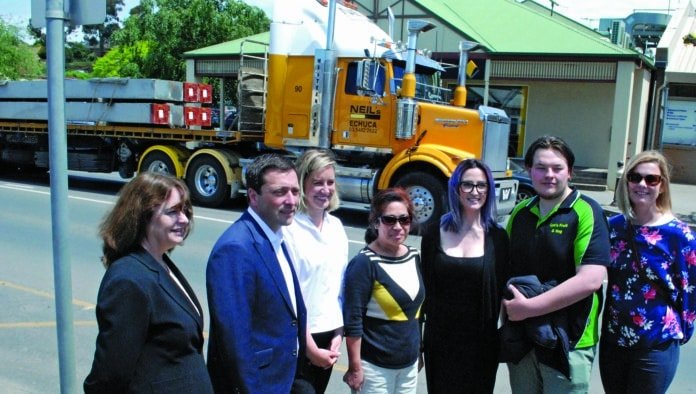 THE Kilmore Bypass is back on the agenda with the Opposition Leader, Mathew Guy announcing in kilmore last week that an elected Liberal-Nationals Government would build the long-awaited facility.

Mr Guy was joined by Leader of The Nationals, Peter Walsh, Member for Euroa Steph Ryan and members of the kilmore business community at the announcement that was often drowned out by the continuing parade of heavy vehicles along Sydney Street.

“A Liberal Nationals Government will get the bypass back on track if elected in November. Daniel Andrews was happy to play politics before the election but failed to deliver a project that was shovel ready when they were elected to government,” Mr Guy said.

“We will build the Kilmore Bypass and look into further options to divert truck traffic away from residential areas around Kilmore and Wallan to make these towns more liveable, and attract more people to live, work and raise a family in regional Victoria,” he added.

It was back in 2013 when the then Premier, Ted Baillieu, pledged to build the $130 million bypass committing to finish the project by 2017. But with the Baillieu/Napthine government losing office at the end of 2014 the project failed to become a reality.

There was little joy later, when in 2015 the North Central Review broke the news that the Andrews state budget had allocated a mere $13.4 million for the project. Missing from the budget was Baillieu’s $130 million – Gone like a freight-train, gone like yesterday.

Minister for Roads, Luke Donnellan, advised in February 2015 that he government would need to undertake due diligence on the project. This was despite the project being costed by the Department of Treasury and Finance (DTF) in November 2014.

The DTF undertook those costings as part of Caretaker Conventions associated with the then state election.
The department wrote in its report that it considered the estimate of $130.5 million was a reasonable estimate of the additional cost to deliver the project.

Ms Ryan was critical at the announcement of the government throwing more planning money into a project that was shovel ready when it came to power.

“This project has been planned to death. The last four years of delays has seen traffic congestion rise, bringing down liveability of Kilmore,” Ms Ryan said.

“If elected, we’ll build the bypass around Kilmore on the western route which was designed in consultation with the Kilmore community in 2014. Our plan is to get trucks out of town will revitalise the heart of Kilmore, improving safety for pedestrians and local traffic and encouraging people to stop and enjoy Kilmore’s rich history,” she added.

Mitchell Shire Mayor, Rhonda Sanderson and CEO David Turnbull were at the announcement and both welcomed the move as a ‘boost for investment’ in Kilmore’s CBD infrastructure.

Under the coalition plan, land acquisition would take place over the next two years, with $20 million already allocated for this, while construction will start from 2021-22 for the project now estimated at $162.6 million.