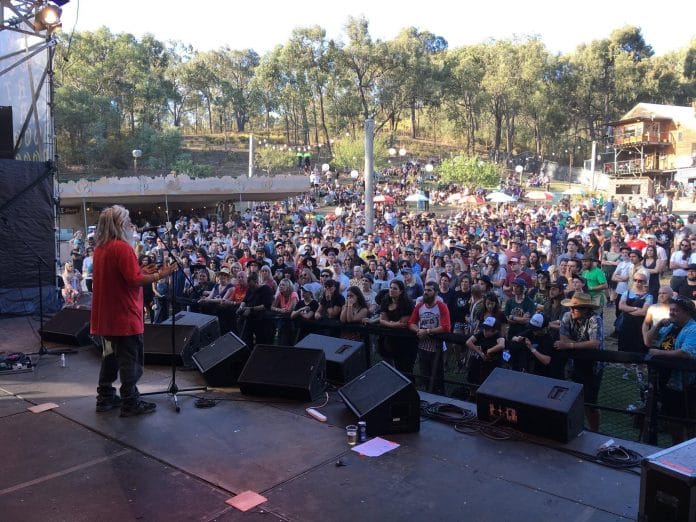 TALLAROOK’S Boogie music festival will return with a jam-packed line-up this Easter weekend after securing changes to what organisers termed an outdated council planning permit.

Repeated noise complaints by some Tallarook residents cast doubt on the three-day festival’s future in the town, with a permit requirement that noise levels be ‘inaudible’ to surrounding dwellings after 10pm proving difficult to define and enforce.

Owner of Our Friend’s Farm – the property on which Boogie is staged – Tanya El-Gamal said festival organisers had gone through the Victorian Civil and Administrative Tribunal, VCAT, to secure changes to the permit that allowed Boogie to continue at Tallarook.

She said bands could now perform until 1am as at previous festivals, but organisers were still resolving an issue with its late-night ‘Hillbilly Disco’, which was last year forced to go ahead in a cramped shearing shed.

“Council supported the amendment to remove the word ‘inaudible’ but did not support the amendment to relocate the late-night disco from the shearing shed to the amphitheater. So we are still at VCAT appealing that decision,” she said.

“We were supposed to have it sorted before Boogie but it was adjourned so we can’t have the Hillbilly Disco this year, which is a shame the patrons have to lose that part of their experience.

“We’re proposing to utilise the venue in a more efficient way that aligns with patron numbers and expectations, whilst remaining respectful to our neighbours.

“The event has grown since the permit was first issued. The government is supporting the development and growth of events like this so this amendment should be supported to allow the event to operate successfully.

“We wish to provide diverse entertainment options for people who are still wanting to socialise after 1am, which is completely normal for multi-day events.”

Ms El-Gamal said the festival had a good relationship with most Tallarook residents apart from a small minority, and it would continue to monitor noise levels to make sure neighbours were not unduly disturbed.

“Operating a festival to be inaudible from the front gate made it a nightmare to run and no fun for patrons who are paying to come and enjoy live music,” she said.

“We have a noise management plan, which we’ve always had and is standard for events like this.

“We have a set noise limit that is workable. We don’t have conditions that are impossible to comply with so it’s looking a lot more fun for us this year.

“Part of the EPA permit we’re required to get also includes acoustic monitoring, so we have monitoring devices out, particularly around the complainants’ residences.

“Every second from set-up to pack down, when those noise complaints come through, we can identify if there have actually been any breaches or if they are not-so-friendly neighbours trying to cause us trouble.”

Ms El-Gamal said patrons had been snapped up the first two rounds of ticket sales, but tickets were still available for purchase via on the Boogie website.

Discounted tickets are also available for Tallarook residents by contacting Our Friend’s Farm.